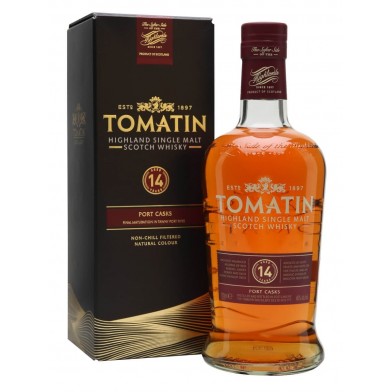 The Tomatin 14 Year Old is soft, smooth and sweet, benefiting from its time spent in Tawny Port casks which previously held port for around 50 years. Rich but balanced aromas of red berries, sweet honey and rich toffee develop into aspects of light fruits and nuts on the palate and an abiding finish of smooth fruit salad.

Founded in 1897, the Tomatin whisky distillery sits at an altitude of 313m just to the west of the village of the same name and quenches its annual five million litre capacity with the pure waters of the Allt-na-Frithe. Closing briefly at the beginning of the 20th century, Tomatin experienced good fortunes and during the 1950s began increasing its stills, installing the last in 1974, bringing its total to an impressive 23, although 11 were dismantled in 2002.

The Tomatin 14 Year Old was introduced to the core range in 2014. It features Highland single malt matured in bourbon barrels as well as specially selected Port casks, imparting wine-like sweetness to the whisky.