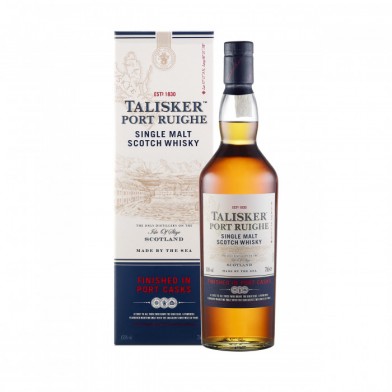 Double matured in port casks, this malt is a toast to the Scottish traders who braved the high seas and were instrumental in founding the port wine trade, shipping it to the world.

Talisker Distillery was built in 1830 by Hugh and Kenneth MacAskill, beside Loch Harport on the island of Skye. The name comes from the Norse, "Thalas Gair", meaning "Sloping Rock" and, until 1928, Talisker used a triple distillation method typically associated with Irish whisky these days.

You can spend years waiting for a new release in Talisker's core range then two come along at once! Hot on the heels of Talisker Storm in early 2013 comes Talisker's Port Ruighe, pronounced 'Port Ree'.  This no age statement release is finished in Port wine casks, imparting a new dimension to this Isle of Skye single malt.

Nose: After a wave of initial sea spray, the nose becomes more complex with Crayola crayons, orange pith and a touch of white chocolate. Demerara and even sticking plaster emerge briefly along with plummy, umeshu notes.

Palate: Initial characteristic Talisker brine once again but much sweeter than usual. Thick and mouth coating like the Storm with chilli and a little chocolate orange. Increasingly smoky - much smokier than the nose suggests.

Finish: Milk chocolate becomes cocoa and oak with mocha notes and the faintest hint of that orange pith once again.

Overall: Alongside the distillery style there are similarities with Talisker Storm with the thicker, oilier mouthfeel and wood smoke. Port Ruighe has taken on additional characteristics from the Port casks however, adding sweetness and different notes such as plum and chocolate.