All new products
> Whisky>Nikka "From the Barrel" Japanese Whisky (50cl) 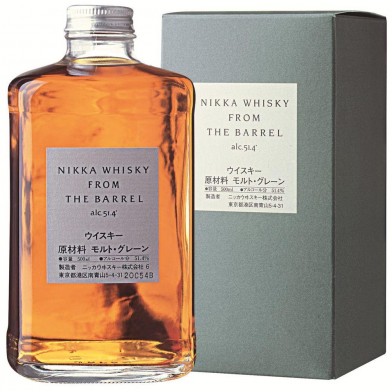 This blend is elaborated with grain and malt from Miyagikyo and malt from Yoichi Distillery. Nikka from the barrel is matured in first-fill bourbon casks and is a perfect balance of the Japanese whisky styles.

Masataka Taketsuru, seen as the father of Japanese whisky, was born in 1894 into a family that had been sake producers since 1733. After training as a chemist, he was hired by an Osaka-based company, Settsu Shuzo, which was planning to produce a Japanese whisky. The young Taketsuru was therefore sent to Scotland in 1919 in order to acquire the necessary technical knowledge and a minimum of experience. He studied at Glasgow University, also learning about the art of blending and distilling. He quickly became passionate about this Celtic spirit, and decided to devote his life to it. His dream was to create a malt distillery in Japan. When he returned to Japan in 1920, he realised that the project for which he had been recruited was not going to see the light of day. And, following the 1922 stock market crash, he lost his job. A year later, he joined the Kotobukiya group, for which he built a distillery close to Kyoto. This is how he became the father of the very first Japanese whisky in 1924.

Deep gold / bright copper appearance. The aroma is pristinely clean and reminiscent of some class sherry bottlings, at the same time it frustrates – even after extended time in the glass it’s reluctant to reveal what seem to be hints of biscuity malt, vanilla and juicy dried fruits. In the mouth, soft, gentle spices unfold a blanket of sweet, nutty, chewy malt and dried fruit flavours. Is there a hint of peat in here too? Clean, slightly tingly mouth feel. The spices increase, but overall this shows good balance at +50%. Finishes as it begins – with the spices more settled and drying as the delicate malt remains into the aftertaste.