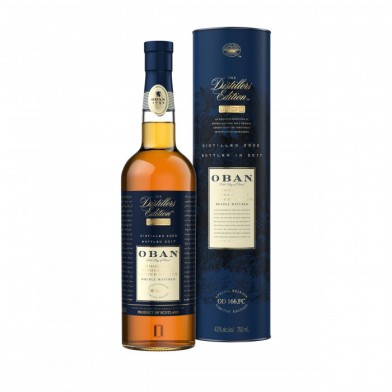 Each Oban Distillers Edition expression undergoes a second (or 'double') maturation in casks that have previously held a fortified wine. The founders of Oban distillery were entrepreneurs who imported and exported goods for which they could sense a demand. They would have approved of the Spanish influence brought to bear in this Montilla Fino cask wood finish. A seriously complex whisky of the highest order.

The Oban distillery is one of Scotland's smallest distilleries with just two small lantern-shaped stills. Cramped conditions led to unusually short lyne arms. Built in the centre of Oban as a brewery by town founders John and Hugh Stevenson, distilling began in 1794. Rebuilt 1890-94 by J. Walter Higgin. The distillery occupies a unique but small town centre site that prevents expansion. Closure was announced in 1968 but it was reprieved in 1972.

This is a "something for everyone" whisky - with a very broad and balanced flavour profile.