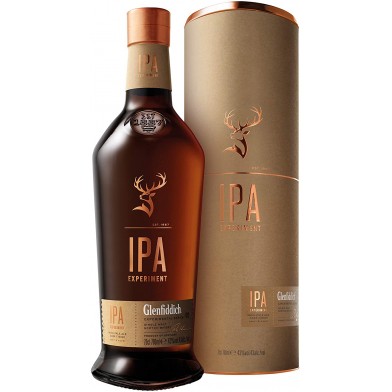 Part of Glenfiddich's Experimental Series comes a single malt which was finished for three months in casks which previously held IPA! Created collaboratively by Glenfiddich Malt Master Brian Kinsman and IPA expert Seb Jones, the IPA which was in the casks before the whisky was specially brewed for this expression by the Speyside Craft Brewery. Bound to be a fascinating whisky for whisky and beer enthusiasts alike (and the cross-over of that Venn diagram, too).

Nose: An elegant harmony of fresh green apple, William’s pear and spring blossom. Complimented with Aromatic hops and fresh herbs.
Palate: Vibrant with a zesty citrus note followed by creamy vanilla and a hint of fresh hops.
Finish: Enduring sweetness with an echo of green hops.