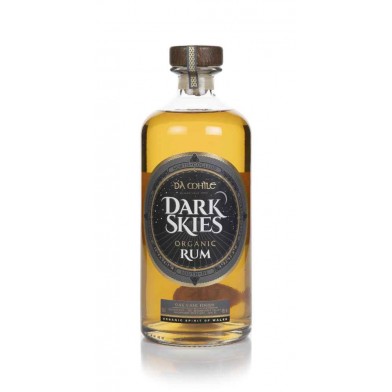 Dark Skies Rum is oak matured with hints of vanilla and raisin and just enough sweetness to work well as either a supping rum, or with a mixer.

In the 1970s and 1980s, there was an emergence of organic wines and beers coming to market when John Savage-Onstwedder thought to himself, why is there no organic whisky? John managed to rectify this situation, as in 1992 Dà Mhìle commissioned the world's first organic whisky (of the modern era) which was distilled at Springbank. This single malt would be a one-off batch to celebrate the millennium, as Dà Mhìle is Gaelic for 2000. He then worked with Loch Lomond on the first organic single grain, distilled in 2000. After creating the first organic blended whisky using the previous two, the idea to build their own distillery emerged, and in 2012 the Dà Mhìle Distillery was born. Dà Mhìle helped to cement Wales as a whisky producing nation as of 2016 (rules state that a country must have a minimum of 2 whisky distilleries to be recognised - Penderyn being the first). The distillery also creates a selection of gins, brandies and liqueurs.