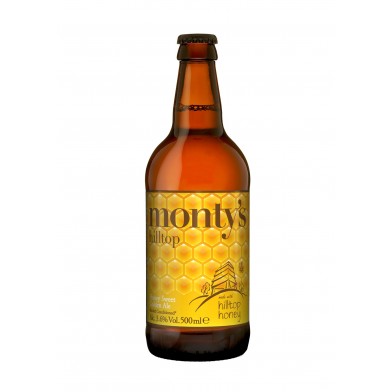 A golden ale with a rounded finish and a hint of honey sweetness.

This a great pint brewed with a little help from local Montgomeryshire producers Hilltop Honey. A real local collaboration; we've combined two of the countrysides oldest, traditional past times - brewing and beekeeping - to produce a great pint with subtle sweet undertones.

Brewed with a little help from local bees...

Now with over sixteen regular, seasonal and specials brews and four local pubs, Monty’s has firmly established itself as Mid Wales’ premier brewery. Bottling has become an integral part of the production process, and in January 2013 a new bottling plant was installed. 2