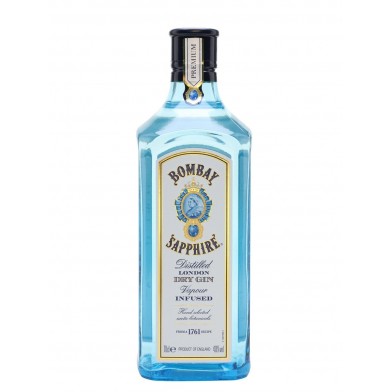 One of the best known and most delicately perfumed gins in the world, Bombay Sapphire makes an excellent Martini, and is great as a base for a Gin and Tonic.

Bombay Spirits Company began with the launch of the Bombay Dry Gin in the late 1950s, produced originally for the American by Greenall’s with inspiration coming from a recipe that dated back to 1761. In the 1980s, the brand was bought by a company that would later become part of Diageo, though it was still produced by Greenall’s. Soon after this, an idea to create a super-premium version of Bombay Dry Gin arose, resulting in Bombay Sapphire in 1987. In 1997, the brand was sold to Barcardi, and yet again continued to be produced by Greenall’s. The carterhead stills which produced the Bombay gins for years were saved from a fire at the distillery in 2005, and eventually moved to the brand new Bombay Sapphire distillery at the Laverstoke Mill in Hampshire, which opened in 2014.