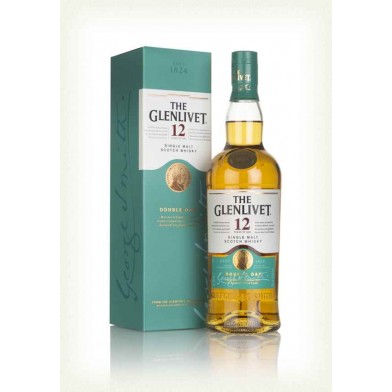 Excellent 12 year old single malt from the Glenlivet Distillery in Speyside, which enjoys its maturation in both European and American oak casks. It's an immensely popular expression which disappeared from shelves in 2015, but has since returned! A great example of the character of Glenlivet's whisky, boasting a bounty of orchard fruit, fragrant florals and honeyed malt notes carried on a creamy mouth feel.

John Gordon Smith, son of the founder George Smith, had to obtain a court order in 1884 stating that only his whisky could be called ‘The' Glenlivet. Anyone else was then required to hyphenate the name - e.g. Glenfarclas-Glenlivet, Tamdhu-Glenlivet, Macallan-Glenlivet, etc.

Palate: Buttery and vanilla-rich, though still packing all the bright fruit notes from the nose.

Finish: A soft crackle of oaky spice and malt, plus a hint of red apple juiciness.