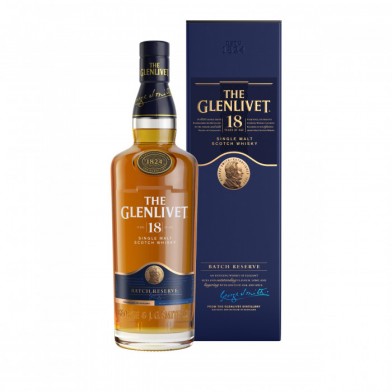 This excellent 18 year old single malt from Glenlivet is a classic Speyside dram, it also won two golds at the International Wine and Spirits Competition.

The rich palate of the 18 Year Old is the result of a combination of several different cask types. The Glenlivet Master Distiller Alan Winchester has a wealth of quality casks to choose from when creating this complex expression, with first and second fill American and European Oak all playing their parts.

John Gordon Smith, son of the founder George Smith, had to obtain a court order in 1884 stating that only his whisky could be called ‘The' Glenlivet. Anyone else was then required to hyphenate the name - e.g. Glenfarclas-Glenlivet, Tamdhu-Glenlivet, Macallan-Glenlivet, etc.

Nose: Quite big and well-rounded. There are notes of chewy sultanas and Sherried peels, barley sugars and toasty cereals with petals and apple blossom. A touch of fudge and gentle wisps of smoke.

Finish: Long and dry with a spicy oak note.