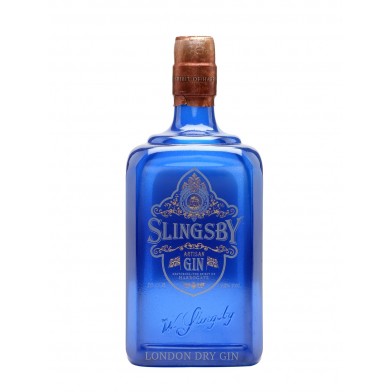 A soft, caramel smell greets the nose, with a stewed fruit sweetness leaping forth. Strong grapefruit leads a citrus charge, while the primrose, hyssop and sweet cicely lend a delicate air.Rosemary and thyme combine to bring a herbal twang, adding a somewhat savoury tone to the subtle juniper.

Spirit of Harrogate was founded in 2014 by Marcus Black andMike Carthy, two enterprising residents who captured and bottled their desire to share the restorative nature of Harrogate in the form of Slingsby – a London Dry Gin bursting with local botanicals.

Carthy – a qualified chemist – had worked in the drinks industry for over three decades before co-founding Spirit of Harrogate, whereas Black is still a relative newcomer, having worked in mergers and acquisitions for 15 years before backing a partial management buyout of InterContinental Brands and joining the firm as Commercial Director. The duo formed Slingsby in order to pursue a different direction, though one that complemented their on-going work with ICB.

The gin is named after William Slingsby, an English adventurer who is said to have discovered the valuable properties ofHarrogate’s Tewit Well water in 1571. The well opened up the town’s spa potential, transforming it into a place of leisure and restoration, bringing what was then a small but prosperous town to life.

Spirit of Harrogate wanted to make a gin that would celebrate this heritage – using both the transformative water and botanicals grown in the area. Working with consumer focus groups to talk through flavours (and making their way through 18 variants in the process), Black and Carthy spent 15 months developing Slingsbyuntil it was a product that they were truly happy with.

Though the gin is made at the Alcohols distillery in Birmingham, the recipe for Slingsby was created entirely by Spirit of Harrogate. They drove the flavour profile from the off and still supply Alcohols with pre-mixed botanical packs ahead of production.

Famed tea suppliers Taylors of Harrogate provide Slingsby with green tea and jasmine, and the others – including the more traditional gin botanicals – are sought from the world over. These are juniper from Madagascar, as well as angelica, cassia, orris root,coriander seed, liquorice, nettles, heather, rhubarb and grapefruit. .

Once the botanicals are weighed, measured, portioned off and sent toAlcohols, they’re mixed with a seven-times filtered English wheat spirit and left to macerate for 12 hours. The spirit is then distilled in Jenny, Alcohols’s youngest still at just over 20-years-old, which stands tall at 10,000 litres. The gin is a multi-shot, made to a concentrate which comes off the still at 87% ABV. This is then blended with more neutral grain spirit and then watered down to its bottling strength of 42% ABV with Tewit Well water.

Langley do not perform any bottling at their distillery, so the finished liquid – which currently is bottled in around 580 bottles per run – is sent to ICB’s bottling site in the North East.