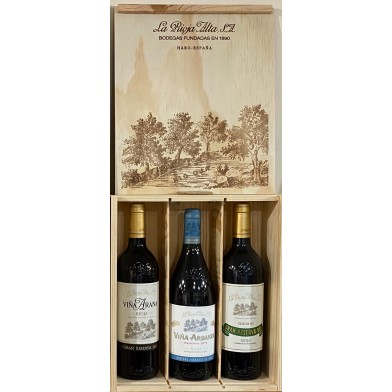 This Luxury gift set explores 3 of the best Rioja's from one of the most well-respected and awarded producers from the region: La Rioja Alta. Including Viña Ardanza ‘Selección Especial, Viña Arana Rioja Gran Reserva and 904 Rioja Gran Reserva, each wine has its own individual character to offer.

Formed by five families in the late 19th century, the La Rioja Alta S.A. winery has been among the leading producers who have helped to establish and maintain the classic standards of Rioja. Their Tempranillo-led Gran Reservas, aged for remarkably long periods in barrels from the producer’s cooperage, are some of the most sought-after wines from the region. And while they always upheld standards and tradition, La Rioja Alta S.A. never stopped experimenting and pushing for better quality, offering some of the purest, precise expressions of Tempranillo in the world.