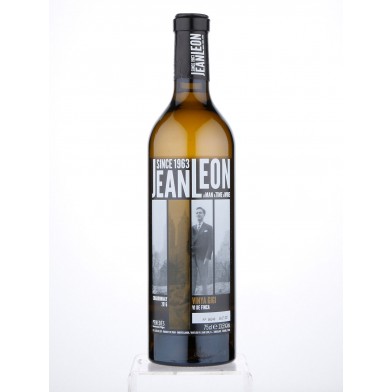 Bright, clean straw yellow in colour. A powerfully aromatic nose, combining primary aromas of pineapple and peach with touches of spiced and lactic notes and final hints of Mediterranean flowers. A persistent palate thanks to its good acidic balance, with a long, elegant mid-palate and a balanced, lush finish.

Jean Leon Vinya Gigi Chardonnay is an organicm single vineyard white wine made with grapes grown in the Penedes wine-growing region of Spain. The “Gigi” vineyard comprises some 5 hectares of very old vines grown on very compact and calcareous clay soil. It is a limited release.

Spanish wine legend Jean Leon was born in Santander, moved with his family to Barcelona, and eventually manage to stow away on a ship bound from Le Havre in France to New York. After driving a cab and working as a busboy and waiter he eventually ended up in Hollywood working at the Villa Capri, a tinseltown restaurant owned by Frank Sinatra and Joe DiMaggio. Soon he was rubbing shoulders with the good, the bad, politicians and movie stars and on April 1st 1956 he opened La Scala, a very famous Hollywood restaurant, which he co-owned with James Dean. Jean Leon became very interested in wine, indeed La Scala had an underground cellar with some 25,000 bottles in, and soon ended up in his home country of Spain looking to make a signature Jean Leon wine.

Jean Leon bought vineyards in 1962 and completed building a winery in 1963. Leon was a real pioneer in the Spanish wine industry, he immediately grubbed up all the local vines and replanted with single vineyards of Cabernet Sauvignon, Cabernet Franc and Chardonnay – in fact, he is credited with being the first to release a 100% Cabernet Sauvignon and 100% Chardonnay in Spain. The Torres family (world famous for wines such as Mas La Plana, Milmanda and Fransola) took control of Jean Leon wines in 1994 but the estate continues to be run as a separate entity from rest of their wines and remains true to Leon’s vision.

This is 100% Chardonnay harvested by hand and 60% of the must is used. The grapes under alcoholic fermentation at a controlled temperature in French oak barrels (55% of the wine), the rest is fermented in 2200 litre wooden vats and cement tanks. The wine is then allowed to undergo malolactic fermentation followed by 6 months ageing on the lees in French oak and a minimum of a further 6 months in bottle in the cellar prior to release.

Wines produced at the Jean Leon estate are certified organic beginning with the 2012 vintage and viticulture has been organic since 2008. This wine is suitable for vegans and vegetarians.