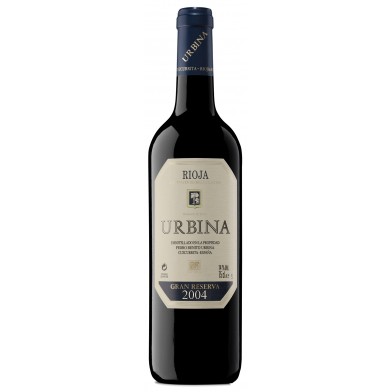 Urbina Gran Reserva 2004 is a wonderfully mature Rioja which seduces you immediately with its very attractive, complex aromas of black fruit, leather and cedary oak. These lead you into layers of rich, savoury blackcurrant and berry fruit flavours that are in complete harmonious balance with oak. This is a wine of great finesse, velvet smoothness and wondrous length.

It has good structure, with some firm tannins in the background which mean that it will last. However, If you want to enjoy a mature Rioja Gran Reserva now, without cellaring it, this is an excellent choice which represents excellent value for such a mature wine from a top Rioja vintage.

This wine comes from a family-owned, Single Estate, around the village of Cuzcurrita, situated in the north-west point area of Rioja Alta and therefore at the limit of vine production. Here the climate is influenced by the cooler Atlantic weather systems which results in a longer, more gradual ripening period and grapes that tend to show freshness, structure and intensity. The magic of this area is that it makes wines that are amongst some of the longest lived in Rioja. Bodegas Urbina is run by Pedro (Senior) and his two sons Pedro and Angel Benito Urbino. Their 75 hectares of vineyards, mostly planted with Tempranillo, have been carefully nurtured by the family for four generations and they use organic fertilisers, indigenous yeasts and avoid the use of weedkillers and pesticides. The vines are grown mainly in the bush form and yields are kept low. The grapes for this wine come from 30+ year old vines and are hand-harvested and selected. It has spent 24 months in American and French oak barrels before 48 months in bottle in the Bodega.

Everything about this bodega centres around ageing. After picking, the grapes are fermented slowly in stainless steel, then aged extensively in a mixture of American (75%) and French (25%) barrels. After ageing in oak, the wines are held in tank which retains a lift and freshness in the wines (rarely seen for this traditional style of Rioja). Pedro Benito Urbina makes a range of wines, mostly red, right across the quality spectrum from crianza to gran reserva. He releases his wines when they are ready to drink and fully mature. They represent the essence of classic Rioja: stylistically they rest their quality on finesse, complexity and savoury flavours, rather than power.