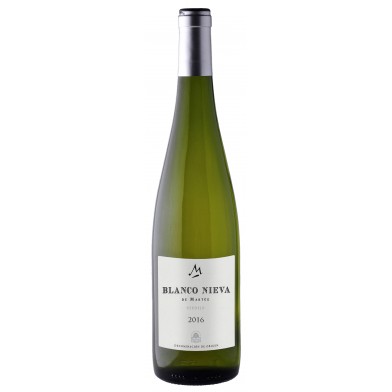 Pale yellow color. Strong bouquet of citrus, green apple, and passion fruit. Round and zesty mouthfeel with citrus, grapefruit, and pear flavors with notes of white pepper. Smooth, elegant, and round. May be compared to Pinot Grigio, but with more body and more acidity.

Bodegas Vinedos de Nieva de Martue – In 1989 Jose Maria Herrero acquired 135 acres of verdejo and 12 acres of Sauvignon Blanc vineyards that had been neglected for many years. The vineyards varied in age up to 150 years old. In 2007 the Martue family purchased the bodega and all of the vineyards. Manuel Gonzalez brings all of his youthful enthusiasm to the bodega and has upgraded the bodega with all of the latest technological advancements. The bodega is located in the small village of Nieva in the southern portion of Rueda.

Vineyards – The bodega is known in the region for its vineyards, many of which are up to 150 years old. The estate vineyards have a very high sand content which is essential for growing the best Verdejo grapes. The bodega uses their top 35% for their wines sell the remaining 65% to other bodegas.

Region - Most of the white wine in Spain is produced near the coast where the per capita seafood consumption is the highest in Europe and second internationally only to Japan. However, Rueda is in the middle of Spain and only white wines are produced in Rueda. Most of the bodegas in Rueda are in the northern portion of Rueda where the soil is mostly clay, but the all of the pictures of the vineyards in the literature are taken in the southern portion where the soil is nearly entirely sand.

Harvest Dates: September 12 – 16 by hand with a selection table

Fermentation: 20 days in small stainless steel tanks at 56 to 58 degrees F with wild (also referred to as indigenous or natural) yeast