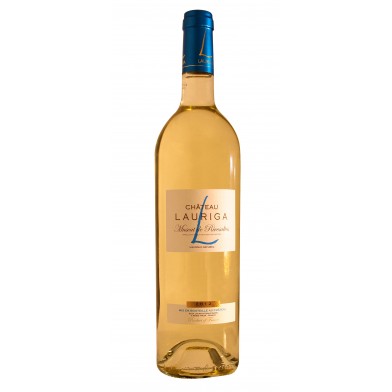 Chateau Lauriga is a winery located in Roussillon in southern France all against the Spanish border between sea and mountains on alluvial lands of quaternary whose filtering soils, due to a high percentage of sand, is ressuient quickly.
There are also some vineyards of Château Lauriga on ancient terraces in very stony soil, in the form of pebbles which soon warmed wine and whose skills were put forward by the previous generations of winemakers. Lauriga castle is an old refurbished Catalan farmhouse, with a cellar to modern winemaking techniques and a vineyard of 55 hectares located on several parcels of land to traditional varieties of Roussillon -Carignan, Grenache Blanc, Black and Grey, Muscat of Alexandria and Muscat à Petits Grains, Syrah- and Mourvèdre, Merlot and Cabernet Sauvignon, with well-typed aromatic expressions.
Part of this land was included in the ancient Laurinya which was ceded in 1068 by the King of France at the Abbey of Cuixà, land that later became the Vigne del Rey that will produce some of the wines served at the King's court Aragon. Domaine Lauriga is the history of Clar family, 4th generation of winemakers.
Dice 1998, with Jean-Michel Barcelo, agronomist and oenologist recognized, the project was launched with a willingness to requirement as to the wine level wine. The soil is analyzed, restructured, amended with organic matter in a spirit of harmony and respect for the environment. One purpose: the quality of the grape.
purposive work of the vine, green harvest, grape selection ... and as many cellar attentions to best accompany the grapes become wine that expresses all its complexity.