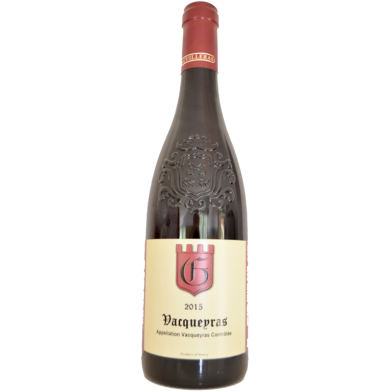 A wonderful and soulful Vacqueyras, full of the region’s famous garrigue (a spicy, herbal notes that is irresistible for Rhone fiends). Based largely on Grenache, as all Vacqueyras must be by law, this 2015 is packed with ripe boysenberry and raspberry fruit culminating in a very pretty, graceful finish.

La Guintrandy is a wine estate situated on one of the most prestigious "terroir" or soils of Visan. "Le Devès." Practically all of our wines, including the rosé, are unfiltered and in order to preserve the bouquet and authenticity of certain wines, produced from the oldest red wines.

We have quite intentionally reduced the SO2 content of our wines in order to respect theist integrity and to avoid dry flavours (and headaches) that are so often to be found in other wines. The domaine "La Guintrandy" is situated at the gateway to the "Enclave des Papes" in the commune of Visan and Tulette. It is a modern vineyard steeped in history ; indeed, in 1966 the remains of Saracen burial ground were discovered on the land.

The name Guintrandy is derived from the Visigoth word Guntran, this place name found in the archives of the abbey of Cluny, which owned the land in around the year 1000. A well-preserved thirteenth century papal boundary stone marks the beginning of the domaine and the borderline between the modern Departments of the Drôme and the Vaucluse.

Later in time the Guintrandy family, nobles from Visan were to become the owners of the land and to settle in the Rue des Nobles ; though they cannot be raced after the middle of the 18th centuries. Since 1850 the domaine has been a family estate and Marie-Claude and Olivier Cuilleras are the fifth and sixth generation of owner winegrowers. The vineyard which crosses the Visan hamlet of Devès and the Tulette hamlets of Combes and Saint-Léger is situated at an altitude of between 180 and 230 meters on calcareous clay which lends itself particularly to wine growing.