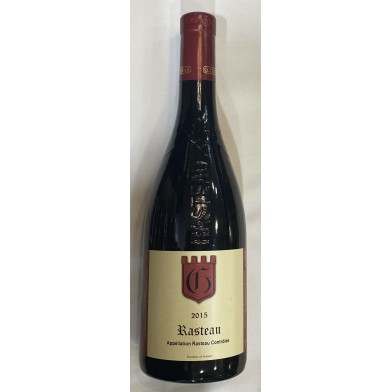 fresh fruits, white pepper and wild herb notes on the aroma and on the palate it is well-balanced, fresh and elegant.

The Domaine "La Guintrandy" is situated at the gateway to the "Enclave des Papes" in the commune of Visan andTulette. It is a modern vineyard steeped in history; indeed, in 1966 the remains of Saracen burial ground were discovered on the land.

The name GUINTRANDY is derived from the Visigoth word GUNTRAN, this place name being found in the archives of the abbey of Cluny, which owned the land in around the year 1000.

A well-preserved thirteenth century papal boundary stone marks the beginning of the domaine and the borderline between the modern Departments of the Drôme and the Vaucluse.

Later in time the GUINTRANDY family, nobles from Visan were to become the owners of the land and to settle in the Rue des Nobles; though they cannot be raced after the middle of the 18 Th centuries.

Since 1850 the Domaine has been a family estate and Marie-Claude and Olivier Cuilleras are the fifth and sixth generation of owner winegrowers.