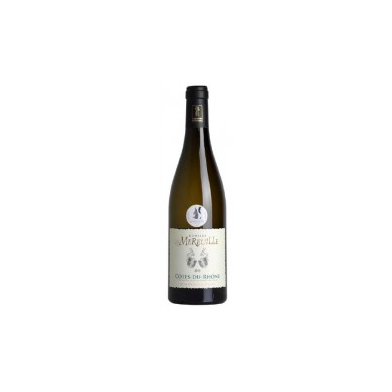 You'll find many fruit flavors in this wine. Some of which will include: peach, melon, and passionfruit. You'll find some citrus notes in the background as well.

For the past two centuries Domaine La Mereuille has been situated in the heart of the Côtes du Rhône and Châteauneuf-du-Pape wine region. Clay soil and round, flattened stones (called "gallets") dragged downstream by the mighty Rhone river from the foothills of the towering Alps. Stony soil soaking up the heat of the daytime sunshine and radiating it, releasing and returning it during the course of the night at the feet of our vines.

The Domaine encompasses some 16 hectares of which 4 hectares are found in Châteauneuf du Pape land and a further 12 hectares in Côtes du Rhône. Their primary grape varieties ("cépages") are Grenache (80%) Cinsault (5%) Carignan (5%) Syrah (5%) Clairette et Bourboulenc (5%) of which the average age is approximately 75 years.

Hand-picked and hand-selected, the grape is vinified, transformed into wine using traditional methods in our winehouse during a minimum of 15 days (during which the temperature is closely supervised and controlled). After the passing of the winter months, the wine is now separated from its lees, to mature in oak barrels (tuns) for between 24 and 30 months for our Châteauneuf du Pape wine and 6 months for our Côtes du Rhône wines before bottling on the Domaine.

Châteauneuf du Pape, which reaches its plenitude towards its fifth year, continues to please throughout its first decade and beyond according to the "millésime" (year) and the conditions of conservation and cellaring.

In 1950 Marcel Bouyer, the grandfather, decided to devote the entirety of the property to wine-producing vines. He began the construction of the winery and bought the first "enjambeur" - high-clearance tractor.

His son, Michel Bouyer, took over the operation in 1970. He added to the vineyard acquiring land with differing grape varieties: old Syrah (shiraz), Cinsault and Carignan in order to bring a refining touch to the wine. With this step he completed the winery and cellar.

In 1985, to enhance the value of his product, he decided to bottle-condition his wines.

Today, the progress of La Mereuille is constant both in France and abroad, both in quality and in sales.