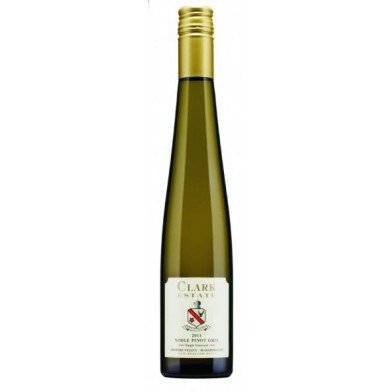 Immediately exotic, this wine is pungent and complex, offering orange marmalade, honey, spice and dried apricot aromas. Although it is sweet, the vibrant acidity balances the sweetness perfectly and keeps it from being cloying. This is a concentrated wine with a long and lingering finish.

Clark Estate Noble Pinot Gris has a very exotic, pungent and complex aroma with orange marmalade, honey, spice and dried apricot aromas. On the palate although it is sweet, the vibrant acidity balances the sweetness perfectly and keeps it from being cloying. This is a concentrated wine with a long and lingering finish.
The Awatere Valley is known for its relatively harsh climate with strong winds and morning frosts in spring working to harden the vines for the high temperatures of summer followed by the cool nights in autumn. As a result the vines struggle and we are able to harvest small, well matured grapes of typical Awatere finesse and flavour.
Late in the season in 2011 it became apparent that a small amount of botrytis was developing. They decided to leave a few rows just to see what would happen. Luckily the weather played its part by bringing a little moisture followed by warm drying winds once a week. These climatic conditions were perfect for the development of Noble Rot. Once harvest arrived, every bunch was infected and had shrivelled to such a point that only the delicious nectar of concentrated grape juice was left.
Once the honey like juice was pressed off the skins, it was put into barrels and yeast was added. The fermentation was slow because of the extreme amount of sugar concentration. After 3 weeks of fermentation, with roughly 350+ g/l of sugar left, the barrels were racked into tank and blended with our normal Pinot Gris to help create balance. The resulting blend, with 165 g/l of residual sugar, has beautiful viscosity and texture.

After long careers as soldier and nurse, Peter & Jane bought a few sheep paddocks by the Black Birch Stream in the Awatere Valley and establish 20 acres of Sauvignon Blanc, from scratch. From 1999 to 2002, the early days, they set about learning how to manage a vineyard. To help fund the venture Peter would often be working in Wellington during the week leaving Jane to train the 22,000 new vines on her own. They would work together all weekend spending the night in their old caravan.
In 2003: dark clouds and a silver lining – after two modest harvests the new crop was completely destroyed by a late spring frost with no grape income for another 18 months and more travel for Peter. Facing the reality of the hardship in operating a vineyard they faced the possibility of giving up. However, the story took a different turn and the hope of realizing their dream was renewed. In 2003 their son Simon Clark joined the team after completing his BVO and working vintages in Australia, Germany and New Zealand.
In 2003 they relocated an old villa from Blenheim to the vineyard and achieved Sustainable Wine Growing New Zealand accreditation and in 2007 daughter Sarah joined them in the sales and marketing role and her sister Jen also helps with wine dispatch.
In 2008 The Clark Estate/Boreham Wood label is born as they converted their entire crop into their own wine. With 12,000 cases and a global recession they had to get better at selling. By early 2009 the gamble paid off with major new export customers in the USA and Australia and a growth in sales in New Zealand. In 2012 Simon took the reins as head winemaker and they won their first gold medal for their Sauvignon Blanc setting the scene for the years to date with more medal winning wines.