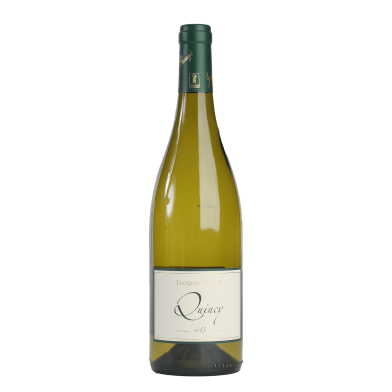 This wine comes from the pebbly Villalin vineyard, on the right bank of the River Cher. The stony, riverside location gives a wine of great minerality to complement vivid fruit. With intense greengage and gooseberry aromas, there is piercing Sauvignon freshness in the mouth, with wonderful clarity of flavour, full body and a fine texture. The finish is concentrated and crisp.

The third generation of his family to work this domaine, Jacques Rouzé is joined in the family business by his wife, Sylvie, and the couple's children, Adèle and Côme. The family owns and farms 50 vineyard acres in various parcels distributed throughout the region, including 38 acres of Sauvignon in Quincy. They also have 6 acres of Pinot Noir and an acre of Pinot Gris in Reuilly, purchased in the late-1990s so Jacques would have the pleasure of producing a bit of red and gris. To accommodate increased juice from that expansion as the vines matured, the family built a new cellar in 2007.

Only the second appellation created in France (after Châteauneuf-du-Pape), Quincy is celebrated for its dry, racy wines produced exclusively from Sauvignon Blanc. The Quincy and Brinay communes comprise this 618-acre appellation, located primarily on the left side of the Loire in Champagne Berrichonne on the edge of the Kimmeridgian marly plateau that hangs over the Cher River. The area is covered by a mixture of alluvium silica-clay soil that drains excess water, while deeper marl (calcium carbonate with clay and silt) preserves moisture in a way that insulates vines from drought. The region enjoys a temperate climate with continental influence. Planted on terraces, vines are dangerously exposed to Spring frost, and windmills have been erected to reduce this risk. Quincy grapes generally ripen earlier than their neighbors in Sancerre and Menetou-Salon.

Rouzé parcels are in the lieux-dits of Les Crèves Coeurs, Les Rimonés, and Le Clos de la Victoire, all on the left bank of the Cher. The family is also fortunate to have vines in Les Grandes Vignes, an exceptional source on the opposite side of the river. Rouzé vineage is clustered around three distinct planting surges: parcels planted 70-to-90 years ago, installations from the late-1960s through the early-1970s, and vines planted from 1982 to 2006. The youngest parcels provide the lion's share of the juice for the Domaine's generic Cuvée Tradition. The Rouzé family produces five other Quincy bottlings, including cuvées by Adèle and Côme bottled as dedicated, eponymous pseudo-domaines.

The Rouzés consistently produce the finest wines of the appellation, strongly embodying the unique characters of the soils, the vintages, and the Sauvignon variety itself.