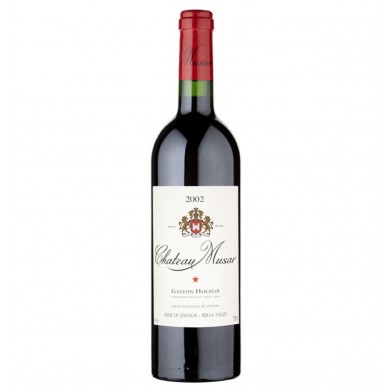 Deep garnet colour, maturity on the rim, autumnal berries on the nose over cedary flavours, maturity showing with a quite rich middle palate that has retained a youthful acidity to lift the finish, overall an elegant Musar that will stay that way to 2030

2002 was a year full of pleasing discoveries which look likely to continue … After four successive years of drought, we had a long, rainy and cold winter which lasted until June. This was followed by a mild July and a hot August. The grapes took longer to reach maturity than average, and the harvest started almost two weeks later than in previous years. The maturity level varied from vineyard to vineyard forcing us to be selective in our harvesting. The grapes were all hand picked in the early mornings.

The grapes began arriving at the winery on the 15th of September. We had to lower the average fermentation temperature to allow the yeast to finish transforming the sugar into alcohol. Fermentation in concrete vats went perfectly well but slowly with the temperature kept below 31°C. The very long fermentation and maceration were totally unexpected. The wines were racked six months after the harvest and then put into French Nevers oak barrels for one year. The three varietals - Cabernet Sauvignon, Cinsault and Carignan – which up until then had been kept separate were blended in the following summer (2004) and bottled in July and August 2005. The grapes of this year were characterised by high levels of sugar, acidity and tannins, and the resulting wines are much bigger, riper and fuller than expected. An exceptional year: normally in Lebanon, high sugar content means less acidity but in 2002 everything was there!

Deep crimson – even blood red - in colour, the 2002 has an intense and complex nose of spicy red fruits and cedar with deeper plum notes. Generous red and black fruit characters follow through to the palate, combining with notes of Christmas cake spices, figs, dates and stewed plums.

This richly-fruited wine shows good acidity, silky tannins and a long, promising finish. This vintage is now tasting more like a Bordeaux blend than I had remembered. Great tannins and structure - Gaston Hochar