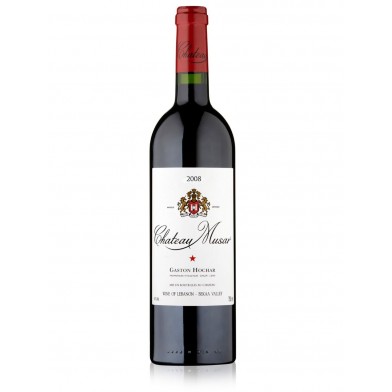 Heady and beguiling with a gamey note on the nose. Very sweet and young; well balanced on the palate. No hurry at all to drink this youthful ferment. Very tight, dry wine that is so much younger than any other vintage tasted. So much more youthful than a Bordeaux 2008! - (Jancis Robinson, March 2018)

2008 was a year full of significant events, each in itself sufficient to change the outcome of the vintage. The weather was unremarkable during the first two months of the year with snow in January and rain until 23rd February. But what happened next was extraordinary – no rain in the Bekaa Valley for the rest of the spring and the whole of the summer. March was fresh but not cold, April, May and June were mostly sunny, helping to achieve 90% flowering. Humidity levels were at their lowest averages: 35 to 40%. Weeds, which are more apparent with organic viticulture, were few in number this year due to the lack of water. In mid-August, a heatwave hit the Bekaa Valley for five days causing all the red grape varieties – Syrah, Carignan, Cinsault and Grenache to reach maturation at the same time. Our main concern was which order to bring the grapes in? Therefore harvesting became a day by day decision. When the first grapes arrived at the winery, we were delighted by the rich, balanced qualities of this early harvest. Fermentation began with the Syrah, followed by Carignan and Cinsault with Cabernet Sauvignon surprisingly the last. The early stages of fermentation were straightforward but a week later sugar levels increased causing fermentation to take longer than usual due to the richness of the grapes.

The Chateau Musar ‘grand vin’ of this vintage is the traditional blend of Cabernet Sauvignon, Cinsault and Carignan – approximately one third of each. The blending took place 3 years later in 2011 and the wines spent a year in French Nevers oak barrels. Bottled unfined and unfiltered and released in the spring of 2015.

The Cinsault of 2008 seemed to benefit most from the heat and exceptional weather and showed abundant red fruit aromas, Carignan displayed blackcurrant and black cherry notes and the Cabernet Sauvignon gave us structure with herbs, coffee and dark berry fruits. The grapes this year were intensely juicy. The wine has a beautiful rich scarlet colour with an alluring nose of black and red fruits, cherries, coffee, leather and cloves. A natural intensity with well-integrated tannins and good acidity – this is a rich, warm, concentrated vintage of Chateau Musar showing an abundance of fruit, energy and considerable finesse. Mature and balanced with a long finish.