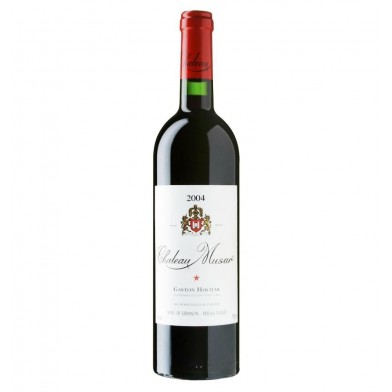 A deep burgundy colour with a nose of mature fruits, plums, cherries, figs, cinnamon and cloves. The aromas follow through to a palate full of rich black and red fruits – plums and damsons dominate with pomegranate, baked cherries and Christmas spices. An intensely concentrated powerful vintage with fine smooth tannins and a spicy, warming finish.

The vintage we experienced in 2004 only happens on average once in every decade. The winter in Lebanon was fairly consistent with previous years with snow until March, spring until June followed by a very mild and gentle summer. Fresh, cool air dominated the summer months which allowed the grapes to mature slowly and steadily. At the very beginning of the 2004 harvest and for two weeks, the grapes had low sugar content with medium acidity. Then suddenly a one week heat-wave changed everything – high sugar content grapes, but again with medium acidity, began to arrive at the winery. This interesting and important experience was like a case study for us, almost as if we were having two different harvests in the same year.

The wines from the first two weeks of the harvest were fruity and mellow with floral aromas from the Cinsault and Carignan. The Cabernet Sauvignon was more powerful, intense and concentrated with mature black and red fruits, leather and spices. Two weeks later the Cinsault and Carignan developed more of a red fruit character, the overall palate became more velvety with smooth integrated tannins.

The wines spent 9 months in cement vats and then a year in French nevers oak barrels and the final blend of Cabernet Sauvignon, Cinsault and Carignan rested for another 9 months in vats before being bottled and transferred to the Chateau Musar cellars high in the mountains at Ghazir to begin its journey of maturation and development.

“Chateau Musar Red 2004 has all the musky, spicy, leathery depth this wine is famous for but it also has a kind of airy lightness too which makes it a beguiling drink”. Simon Hoggart – The Spectator Magazine March 2011