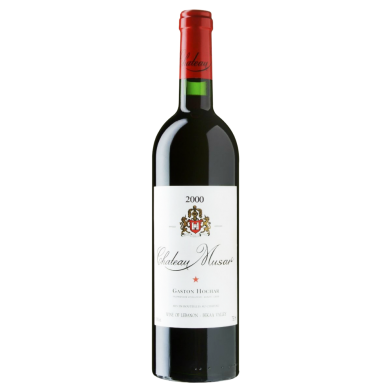 The colour is a deep dark red, perhaps darker than usual at Chateau Musar. The nose is a complex, intriguing mixture of figs, prunes, leather, dark tea, tobacco, black olives with spices and a certain earthiness. On the palate, you will find ripe black cherries, figs, damsons - even chocolate and olives. There is good acidity with nice smooth tannins resulting in a wine which is full-bodied, rich and velvety, with very long length.

The 2000 vintage of Chateau Musar is a blend of Cabernet Sauvignon, Cinsault and Carignan – approximately one third of each. It was fermented in cement vats and then aged for one year in French Nevers oak barriques. It was blended and bottled at the end of the third year following the harvest and aged for a further three to four years in the cellars of Chateau Musar at Ghazir, before its release in May 2007.

In summary we feel that the 2000 vintage is a serious wine with serious ageing potential, but with a very approachable and open style which makes it perfect for drinking now as well as for cellaring. Perhaps more Bordeaux like in character than in previous vintages.

“Closer to a fine Bordeaux but it will age gratifyingly well for a very long time. And you can drink it with pleasure now: all that soft, velvety, peppery, spicy, earthy, even chocolatey quality is already there in spades.” Simon Hoggart – The Spectator February 2007