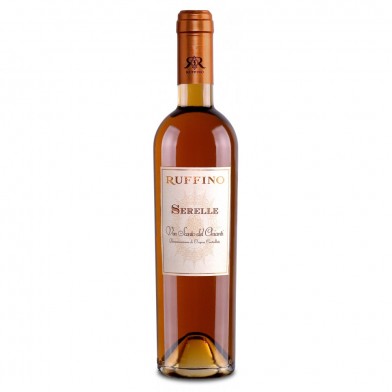 Aromas of candied fruit and notes of honey, eucalyptus and citrus fruits as well as an intriguing touch of nutmeg and caramel. The palate is dense and rich, packed with dried fruit flavours such as apricot, pineapple and fig, with a delicious sweetness in balance and a refreshing finish.

Serelle is the Vin Santo del Chianti of Ruffino, produced by drying on the trellis of Trebbiano and Malvasia in the evocative "vinsantaia" of Gretole. Although the first official mention of vinsanto in 1773, within the treaty of Cosimo Villifranchi on Tuscan wines ("Tuscan Oenology"), there is no doubt that this wine has been produced for centuries.

In fact, since the Middle Ages, vinsanto has always had a place of honor in Tuscan enology. There are many anecdotes about the origin of the name. One of these tells of friars who from the fourteenth century used to distribute to the sick the wine they had used during the mass (hence the "holy" appellation), trusting in its therapeutic virtues. Another of these stories tells that to the Greek patriarch who visited Florence in 1349, this Bessarion, a sweet local wine was served: after having drunk it, the patriarch seems to have exclaimed: "But this is wine from Xanthos", an island Greek where famous sweet wines were produced. Italian diners understood "holy" and began to call this sweet wine. Other hypotheses connect the holy word to the fact that the end of the extinction coincided with the Catholic holy week.

It was only in the 800s that the slow "proletarianization" of vinsanto began: even the peasants, not only the wealthiest or the ecclesiastics, began to produce, together with the dry wine, even small batches of sweet wine to be served on special occasions to people. more expensive. This custom is still alive among the Tuscan peasants.

The arrival of the DOC in 1997 has allowed to bring clarity in a typology of wine misunderstood with others. For example, "vin santo" were considered to be liqueur wines with added alcohol after fermentation. Vin Santo DOC is made only of white grapes predominantly Trebbiano and Malvasia (at least 70%) dried on racks and with the natural alcohol content.

The grapes must undergo natural drying to reach a sugar content of not less than 26% and can be pressed no earlier than December 1 and no later than the first of March following the harvest. The vinification and aging must take place in wooden containers (caratelli) with a capacity not exceeding 5 hectoliters. The release for consumption can not take place before the first of November of the third year following the harvest.

During the harvest, it is preferred to use sparse, thick and rich tannins, the right compromise between grapes that know how to defend themselves from mold and rot and that can guarantee a satisfying process of dehydration. In fact, hanging in the traditional vinsantaia, an environment characterized by constant ventilation, the clusters of Trebbiano and Malvasia, are dried very slowly until December. The must obtained after pressing, viscous due to the high concentration of sugars and minerals, is transferred into 225 liter oak barrels in a temperature-controlled environment at 15/17 ° C for alcoholic fermentation which continues until the entire month of March . Vin Santo is then poured into clean stems where it refines, in an oxidative process, for about 3 years