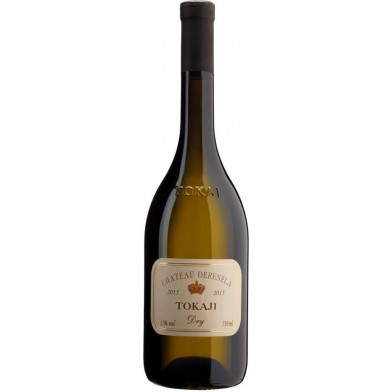 The Furmint grapes for Dry Tokaji wines such as this are picked much earlier than those for their sweet counterparts. Though they don’t therefore have the sugar levels, some characteristics of those famous stickies remain in the flavous of apricots and orange with a deliciously gentle spicy backbone, a pronounced texture, as well as high acidity and a notably long finish. The Furment is blended with 15% Harslevelu grape variety to enhance the crisp, fresh character of this wine.

Tokaj wine region, situated in the North-East of Hungary is famous for its sweet wines made of shrivelled berries due to the influence of noble rot, as known as Botrytis cinerea. Tokaj has a long history of producing dessert wines with traditional method.

Tokaj – much before Bordeaux

According to the legend the first Tokaji Aszú was made by Máté Szepsi Laczkó in 1630 and ’tokaji’ was served as early as the era of Louis the 14th French king in Versailles, in the royal palace, since the epicurean king adored the sweet wines of Tokaj. ’Wine of the kings, king of the wines’ – commented the ruler when he offered his favourite wine to his mistress, Madame de Pompadour. The saying in latin is often quoted as well: Vinum Regnum, Rex Vinorum.

Few experts know, but Tokaj was the very first in the world to introduce the system of appellations controlled, 120 years before Bordeaux classification! From as early as 1730 Tokaj vineyards (altogether 5500 hectares) were classified as first, second or third growth. 800 hectares out of the 5500 were classsified as first growth.

Only 6 grape varieties are allowed to grow in Tokaj wine region: Furmint (60%), Hárslevel? (30%), Muskotály (Yellow Muscat),  Kövérsz?l?, Zéta (Furmint x Bouvier), Kabar (Hárslevel? x Bouvier). The wine region has unique climate, and its soil is mainly of volcanic origin with a smaller propotion of loess, and with high concentration of iron and limestone.

Dereszla – a royal winery from the beginning

The first written records of Dereszla Winery are dated back to as early as 1406, since Dereszla belonged to the Hungarian king’s court in the 15th and 16th century. Chateau Dereszla winery was founded in the 18th century. Due to investments after the year 2000, the entire technical background has been renewed, new stainless steel tanks were built is, new pressing and bottling plant have been installed. After the complete renewing of the technical part, the one kilometre long historic underground cellar has been reconstructed, then the storehouse and other service facilities have been updated to the latest technology.

In 2015 a new branch of Dereszla group, Henye Winery was built and equipped as a green field investment – with all the necessary equipment to produce méthode traditionelle sparkling wine!

Dereszla has its 40 hectare own vineyard and they produce wines from another integrated 100 hectares – which are situated in 25 vineyards classified as first growth. The main vineyards of Dereszla: Dereszla, Lapis, Henye, Hatalos, Zsadány, Várhegy. The differen types of soil of the different vineyards are crucial in creating the complexity of Dereszla wines.

Chateau Dereszla has a wide portfolio from dry Furmint through semi dry and semi sweet wines, late harvest and ’szamorodni style’ wines to the most wellknown aszú wines and ’essencia’. Chateau Dereszla wines are exported to more than 40 countries.