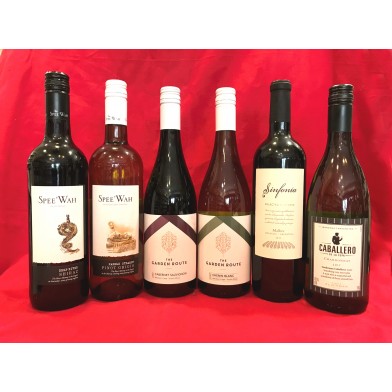 Grown on limestone soils in north western Victoria, this Shiraz has a savoury black pepper flavour with a hint of spice and lifted fresh fruit on the finish.

Apples and pears predominate this lovely fresh, dry white wine. The palate stays light, though becomes a little more opulent as the wine opens up with peaches and hints of tropical fruits leading to a clean, dry finish.

The Murray Darling is the second largest wine region in Australia and the name of two rivers (the Murray and the Darling) which converge in the Murray Darling Basin in New South Wales. Until the 1880's, the region was a dessert, then irrigation opened up the area to agriculture with vines being particularly suited to the climate. Today there are over 30 boutique wineries, such as Deakin Estate, Trentham, Zilzie and Chalmers producing excellent wines as well as top everyday wines.

This is lovely all-round white wine which can be enjoyed on its own and with chicken, white fish (particularly Dover Sole) with a simple sauce or just a squeeze of lemon.

South Africa's 300 mile long Garden Route might have the second mildest climate in the World, but the flavours in this wine are a million miles from mild. Rich, ripe, blackberries and spice.

Following the Second World war, a group of visionary winemakers joined together to help provide wine farmers of the Western Cape with the facilities and expertise needed to produce quality wines on a larger and more sustainable scale. These collective efforts led to the founding of Simonsvlei wines in 1945, named in honour of the founder of the South African wine industry.

The winery continues to strive towards a goal of supplying the best quality wines at the best prices to their customers world-wide. Amongst their broad range of wines are the delicious ‘The Garden Route’ wines.

Grapes used for The Garden Route Cabernet Sauvignon are grown on 10 to 15-year-old vines. Once picked, the fruit is crushed and destemmed before being fermented in stainless steel tanks. No milk or eggs are used at any point during the production of this wine.

This red wine is smooth and juicy, filled to the brim with rich aromas of ripe blackberries, which carry on to the palate.

This is a lively, refreshing white wine made from Chenin Blanc grapes. With mouth watering aromas of ripe apples and pears, it is both elegant and inviting. A wine for dreamers and optimists.

This Chenin Blanc is best served chilled on its own or to accompany light savoury dishes. It is especially good when dreaming of holidays.

Made from the grapes of vineyards located at the foothills of the Andes.

An intense ruby red with shades of violet whose attractive fruit flavours integrate seamlessly with hints of vanilla, which make this a smoot drinking Malbec.  Enjoy with red meats and mild pasta dishes.

The winery was founded in 1910 by Polish immigrant Don Sami Flichman.  He purchased property in Barrancas (southern Maipú) and planted vines in rocky, well-drained plots situated along the Mendoza river. It was Sami’s son Isaac who first began to make fine wine at the estate, including Caballero de la Cepa, one of the first high-quality wines that garnered international awareness for premium Argentinian wines. Sogrape Vinhos purchased Finca Flichman in 1998, and invested heavily in restoring the vineyards and modernising the winery. The original Barrancas vineyard remains among their 400 hectares of vines, which also includes the higher altitude Tupungato vineyard. Today the wines are made by Germán Berra, one of Argentina’s brightest talents, who was recognised as the ‘Best Young Winemaker’ in the Argentina Wine Awards in 2016. Germán works closely with consultant and renowned winemaker Alberto Antonini.

Grapes for the Caballero de la Cepa wines are picked from the Barrancas region in southern Maipú, Mendoza. The vines here are planted in rocky, well-drained plots situated along the south side of the Mendoza river. The vineyards sit at high altitudes, meaning that there are large temperature differences between day and night. This extends the growing season and helps to retain freshness and finesse in the wines.

Deep yellow, with green hints, this wine bursts with aromas of pineapple and asparagus, with a touch of vanilla. On the palate, tropical fruits are prevalent, complemented by the vanilla scented oak. The rich, opulent character continues through to the finish.