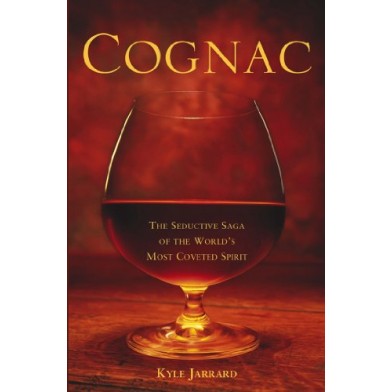 Called the "brandy of the gods" by Victor Hugo, Cognac is a universal symbol of refinement and quality. In the first comprehensive history of this celebrated drink, Kyle Jarrard charts Cognac's birth in the 1500s and its transformation into the world's most coveted brandy.

For any Cognac lover, this fascinating book will make the perfect gift.

“…informative and entertaining…the sort of admirable guide you’d want on hand if you ever visited the region of contemplated buying a bottle…” ( Business Traveller ) “…a good read…” ( Wine International ) Cognac isn′t just any brandy. Named after the western French town on the Charente River near Bordeaux, only those spirits distilled in the Cognac region may carry that distinction, according to a 1909 French law. Cognac: The Seductive Saga of the World′s Most Coveted Spirit delivers plenty of factoids about the famed brandy, which has been produced there since the 1500s. Jarrard is an American journalist and novelist based in France since 1981, when he married into a Cognac–region family. Today, the four top–selling manufacturers, Hennessy, Remy Martin, Martell, and Courvoisier, control 74 percent of world Cognac sales, which in 2003 amounted to 1.3 billion euros ($1.7 billion). Of 127 million bottles of Cognac produced in 2003, 121 million were exported, according to the Cognac trade bureau. Jarrard offers picturesque details about how the industry leaders got started: Hennessy Cognacs was founded by Richard Hennessy, an 18th–century Irish soldier of fortune who fought for French King Louis XV, after which he stumbled onto the Cognac region and decided to get into the less perilous business of distilling brandy. Lice, Mildew There are dramas like the 19th–century epidemic caused by a louse, the Phylloxera vastatrix, which ate the roots of vines and threatened the entire region′s production. Grape vines imported from north Texas, where chalky soil was similar to that of the Cognac region, saved the day but also caused a devastating epidemic of mildew. Both of these scourges, Jarrard gloats with the aplomb of an assimilated emigre to France, came from plants imported from the U.S. Jarrard also freely casts blame about Cognac′s record during the Nazi occupation of World War II, when business boomed. “In 1962, after the death in Germany of Gustav Klaebisch, the Nazi Lieutenant who was overlord of wartime Cognac, some local Cognac businessmen still wanted to name a square after him,” he writes. While this may dismay some Cognac consumers, others will be pleased to read about the Hennessy Tasting Committee, which meets at 11 a.m. daily to sample some 40 drinks, in search of perfect “elegance.” Some brandy drinkers may legitimately prefer Armagnac, from the Gascony region south of Cognac. Or they might follow Winston Churchill, whose favorite “Dvin Brandy” is made in the Ararat Valley in Armenia; a bottle of Dvin was presented at the 1945 Yalta Conference by Joseph Stalin to Churchill, who said, “Always remember that I have taken more from brandy than brandy has taken from me.” Readers of “Cognac” will take away lots of information about the alluring—if not, in fact, unrivaled –– French brandy. ( Bloomberg News wire, March 15, 2005) It’s fitting that a Paris–based novelist and International Herald Tribune editor should chronicle the history of the famously refined French brandy. And Jarrard does a nice job of it, offering a thorough, well–researched and objective history of cognac. He begins with a geological history of the French province of Charente, on the Atlantic coast, where the town of Cognac is located. The Romans brought the first grapes to the region, but it would be centuries before viniculture really took root there. The earliest attempts to make what we now call cognac began during the Middle Ages, as alchemists and apothecaries experimented with putting local grape pressings through their distillation apparatuses. While France evolved from a feudal kingdom into an imperial, colonial power, the cognac–making process developed, although factors like weather and warfare often prevented distilleries from obtaining the necessary raw materials. By the Napoleonic era, however, cognac began appearing on the world market, and its makers worked at refining their product and their methods as demand for the elegant, amber, aromatic brandy increased. Jarrard brings the story to the present, examining the various brands dominating the market today, including Hennessy, Rémy–Martin and Courvoisier."