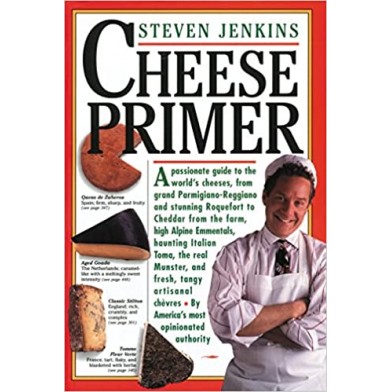 Region-by-region, this work covers all the major cheeses from France, Italy, Switzerland and other countries. It also includes information on the best ways to store and serve cheese, including which wines to serve alongside them.

From the Back Cover

A WORLD BEYOND BRIE

Brimming with knowledge, enthusiasm, and decided opinions, Steven Jenkins's CHEESE PRIMER is everything you need to know to judge, savor, choose, store, and serve the terrific variety of cheeses now available. He presents a region-by-region guide through France, Italy, and Switzerland, as well as the British Isles, Spain, the U.S., and other cheese-producing countries. Here are all the well- and little-known cheese worth exploring-and some surprising heavyweights you may want to avoid ) imported Brie, for example.

A complete primer, its features include pairing wine with cheese, orchestrating a cheese course, and local gems to seek when traveling abroad.

Steven Jenkins is the first American to be awarded France's prestigious Chevalier du Taste-Fromage. He has created and/or revamped the cheese counters at Dean & Deluca, the Fairway Market, Balducci's, and other celebrated fine food shops in New York and across the country. A Broadway impresario hos' hit is food (New York Times), Mr. Jenkins lives with his family in New York City.

Steve Jenkins grew up in Columbia, Missouri. Upon graduation from high school he moved to New York City to pursue a career in acting. That was in 1973. While waiting for his big break into show-biz, he took a job in a cheese store. After a year he became manager, but he found retail rote; two years and a couple of minor soap opera roles later, he was fired for telling the owner he was in the store when he was actually in his apartment. Jenkins then met Joel Dean and Giorgio DeLuca, and became their first employee. He created a new sensory experience by liberating cheese from the confines of a refrigerator case at the now legendary Dean & DeLuca specialty food shop. He built pyramids of cheese atop the counter using hundreds of pounds of orange, rock-hard, aged Goudas. He used slabs of Carrara marble and wooden cutting boards to display Bries and heaped Pillivuyt porcelain souffle dishes with fresh goat cheese sprinkled with herbs and drizzled with olive oil. The more Steven learned about cheese, the more he realized that this country was sorely lacking in its selection of truly great cheeses. So he went to France in search of real cheese. On his return, his shipments from Rungis began to arrive--cheese the likes of which had never been tasted before in New York. Real Brie from Brie, and real Camembert from Normandy. The next six years he traveled frequently throughout the cheese-producing regions of France, Switzerland and Italy. Jenkins has created and/or revamped the cheese counters at Dean & DeLuca, the Fairway Market, Balducci's, and other celebrated fine food shops in New York and across the country. He has rejoined the Fairway Market. Jenkins was the first American to be awarded France's prestigious Chevalier du Taste Fromage and is frequent contibutor to Food Arts, Food & Wine, and the Gourmet Retailer.