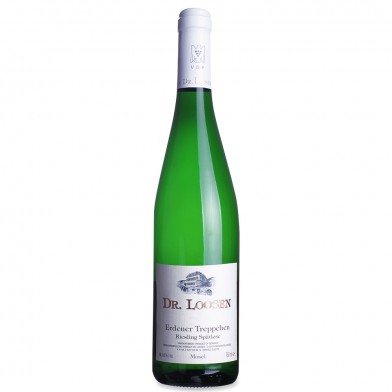 Crushed stone and bramble notes are brightened by hints of hibiscus nectar, lime and grapefruit in this crystalline medium-sweet Riesling. Citrus acidity on the midpalate is bracing yet balanced, coated by a lacy veil of sugar that lingers sweetly on the finish.

The Erdener Treppchen (pronounced AIR-din-er TREP-shen) vineyard in Germany’s Mosel Valley is so steep that long ago, stone steps were built into the hillside to enable workers to reach the vines. Hence the name.

This vineyard was rated “First Vineyard” (“Erste Lage”) in the 1868 Prussian classification of the Mosel, and is rated “Great First-Class” in the Wine Atlas of Germany by Hugh Johnson & Stuart Pigott (1995).

The iron-rich, red slate soil produces wines that are muscular and complex, with an intense minerally finish. Wines from Erdener Treppchen are more like a powerful, hard-body rock climber (as opposed to the graceful ballet dancer that characterizes our Rieslings from Wehlener Sonnenuhr).

They benefit greatly from a few years in the bottle to develop fully, and therefore, would be a great addition to any cellar

Gunderloch winery was founded in 1890 by the Banker Carl Gunderloch. Since then it has been the passion of the family to focus on the Riesling variety which finds perfect conditions in their vineyards.

The 250 million-year-old “red slate” -Soil from Permian times and the special microclimatic setting on the steep slopes next to the impressive River Rhein build the base for the creation of unique wines. At the Moment the Hasselbach Family cultivates 24ha of vineyards which are planted with 85% Riesling. 100% healthy fruit from young vines in Rothenberg, blended with grapes from 35-year-old vines from Hipping. Every part of grape used (long maceration on fully crushed grapes up to 72 hours; minimal clarification; natural yeast fermentation; long time on lees) and nothing lost or altered (no artificial yeasts; no fining; no aromatization of any kind).

Johannes Hasselbach has well and truly hit his stride after taking the winemaking reins from his late father Fritz a few years back. Warm, charming, modest and brilliant Fritz Hasselbach, who passed away from illness in October 2016, was the man who lifted the estate into the Rheinhessen’s top flight. Johannes and the team are taking it even further, turning out stunning wines from top-rated vineyards of the Roter Hang, a steep hill of red slate overlooking the Rhine. The dry Rieslings are intensely concentrated and expressive of the red volcanic soil. The fruity wines are even more so, with their touch of sweetness that acts as a conduit for flavour and aroma. Nackenheim Rothenberg is one of the great vineyards of Germany. Gunderloch was the first winery in Germany to put its entire range under screwcap and holds the ‘claim to fame’ of scoring a hat-trick of 100-point reviews in Wine Spectator. Named in honour of the late, great man himself, Fritz’s Riesling adds a lovely dimension to the line-up.