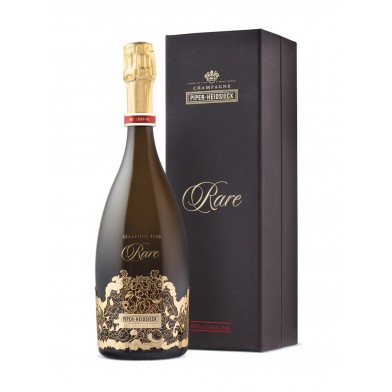 A yellow gold colour with a fine bead of bubbles. Initial citrus notes give way to more exotic fruits of mango and kiwi on the nose. Great depth on the palate with honeyed notes and a creamy texture. Full-bodied and nicely balanced with lime and exotic fruit flavour throughout. A long finish of pineapple and candied ginger.

Piper-Heidsieck Rare is a truly unique prestige cuvée. In the summer of 1976, an unprecedented heatwave struck France, the likes of which the Champagne region had never experienced before. Piper-Heidsieck's winemaking team began to wonder: could it be possible to create a cuvée given the remarkable conditions? Taming the natural forces was no easy task and when assemblage was complete and the final blend bottled, the team were so proud of the final product, they called it Rare. A testament to exceptional vintages where nature unleashes its forces, Rare cuvées are only produced in supernatural years. Piper-Heidsieck Rare 2002 is only the seventh vintage of Piper-Heidseick Rare ever created.

Weather: The 2002 vintage shaped up magnificently over the spring, with no significant frost and near-perfect flowering. Then followed a summer marked by long, sunny periods interspersed with regular cloudy and rainy spells. The vines were in good health and the dehydration of the grape berries helped them reach new heights of ripeness. Generally considered one of the best harvests in the last twenty years.