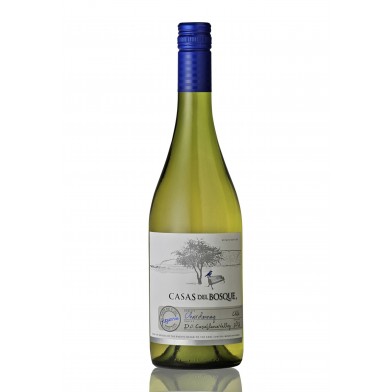 Pale straw in color. On the nose fresh aromas reminiscent of quince and pineapple combine with notes of grilled nuts and vanilla. In the mouth the wine is medium bodied with complexity, freshness and excellent length.

PRODUCER:   For many years, Juan Cúneo Solari, the son of an Italian immigrant, dreamed of having his own vineyards in order to produce exceptional wines. In 1993, he finally founded his winery in the Casablanca Valley and named it Casas del Bosque. He was one of the first to plant in the area. Since then, the valley has seen a boom in popularity, and Casas del Bosque remains one of the few family-owned wineries.

WINEMAKING:   The grapes were carefully machine harvested at night. Upon arrival at the winery all grapes were first destemmed and crushed to stainless steel tanks where they were then left to cold soak for five days. Following this time, the free-run juice was drained by gravity from the tanks. The resulting juices were then left to cold settle for 4 days following which time 48% of the blend was gravity fed to a mixture of French oak barrels where it was fermented during a period of 25 days. The remaining 52% of the blend was ultra-cool fermented in stainless steel tanks. After fermentation had finished the barrels were sulphured at which point battonage (or manual lees stirring) was carried for ten months. After this the wine was gently nitrogen racked to tank at which point it was cold stabilised, filtered and bottled.

TASTING NOTES:    On the nose this wine shows intense notes of key lime, grapefruit and fresh ginger dominate with just a hint of salinity. In the mouth, bright flavours of ginger and citrus zest give way to a tight mineral backbone and good acidity. Delicious served chilled as an aperitif, or paired with light pasta dishes, salads or poultry.