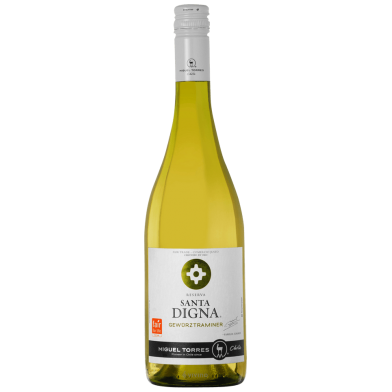 Lustrous yellow colour. Classic honey-and-flowers bouquet with suggestions of roses, jasmine and orange blossom. A fine, fullbodied wine, with the luscious, tropical fruit and perfumed character of the grape varieties balanced by a bite of acidity

Miguel Torres Chile was founded in 1979 by the Torres family. The family had produced wines in Spain for more than 140 years and already owned vineyards for more than 300 years.

Miguel A. Torres decided to begin the Chilean project on the advice of Alejandro Parot, a Chilean friend and classmate from his studies in Dijon (France). After the search for a destination in America for the development of viniculture, the firm acquired a vineyard of 100 hectares close to the Andes mountain range and a small cellar near Curicó (city located 200 kms. South of Santiago).

Despite the fact that, in 70 years, Chile hardly exported wine and there were few foreign investments given the socio-political situation, Miguel A. Torres decided to gamble on the immense potential of Chilean wine.

The presence of extremely varied seasons and spectacular differences between the maximum and minimum temperatures which reach above 20°C due to the proximity of the Andes mountains with their perpetual snows and the climactic influence of the Humboldt Current played fundamental roles. These strong differences in day and night were ideal for the vineyard improving the capacity of the grapes to accumulate their best aromas. “It was an ideal place to produce unforgettable wines, ” is how Miguel A. Torres affirmed in the mid seventies that Chile was a paradise for viticulture.

The decision to select Chile for excellent climatic conditions was not enough. Miguel Torres Chile was the first to introduce new technologies in the production of wine such as fermentation in stainless steel tubs and aging in French oak barrels along with contributing to the growth of Chilean wines in the last 30 years.

With the passing of the years the company acquired new properties and increased its installations and range of products. Today the winery has approximately 400 hectares of vineyards planted in 6 properties with well differentiated characteristic climates. This allows for the cultivation of diverse varieties and production of wines with intense varietal character.

Beginning in 2010, Miguel Torres Maczassek, member of the 5th generation of the family, assumed presidency of the company in our country with the objectives of incrementing exports and overseeing the development of the Winery. This new era in the Chilean Winery was focused on organic viticulture and Fair Trade certification of the line of wines best-known by consumers: Santa Digna (Fiar for Life). These advances have helped to make it a more sustainable company as well as carry out many projects among the various populations close to Curicó.