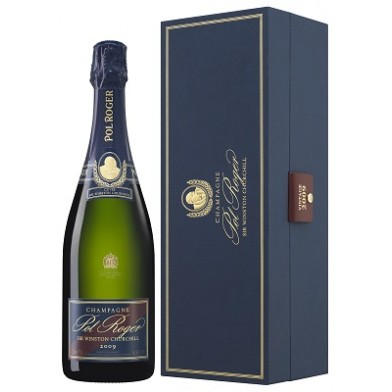 Sir Winston Churchill was Pol Roger's most illustrious devotee and customer. This Champagne is made in his honour. Churchill's relationship with Pol Roger dates back to 1945, although he had been a loyal customer as far back as 1908.

Only 9 left in stock!

Sir Winston Churchill was Pol Roger's most illustrious devotee and customer. This Champagne is made in his honour. Churchill's relationship with Pol Roger dates back to 1945, although he had been a loyal customer as far back as 1908. At a luncheon given by the British ambassador to France after the liberation of Paris, Churchill met the charming and captivating Odette Pol-Roger and began a friendship, indulged by his wife Clementine, which lasted until Sir Winston's death in 1965. Each year on his birthday, Odette would send him a case of vintage champagne.
In honour of his friendship, Churchill named one of his favourite racehorses after her, and made sure that she was invited to lunch at the British embassy every time he was in Paris. Despite never actually visiting 44 Avenue de Champagne, Churchill proclaimed it "the most drinkable address in the world". So close was his relationship with the family that, on Churchill's death, Pol Roger put black-bordered labels on the bottles destined for the UK. In 1975, Pol Roger went one step further and named their prestige cuvée after him, making it in the robust, mature style that he liked so much.
The grapes are all from Grand Cru vineyards which were under vine during Churchill's lifetime and it is only made in the very best vintages. It is made in a style which Churchill himself favoured: robust, mature and long-lived.
The first "Cuvée Sir Winston Churchill" was from the 1975 vintage and was released, in 1.5L only in 1984 with the launch taking place at Blenheim Palace. There followed 1979, 1982, 1985, 1986, 1988, 1990, 1993, 1995, 1996, 1998,1999, 2000, 2002, 2004 and 2006.
The latest vintage, 2009, is the eighteenth of this great cuvée and is released only after 10 years of cellaring.
Produced in very small quantities, it is available in 75cl bottle and 1.5L.
Tasting Notes:
The opulent golden colour of the wine is enlivened by a fine, harmonious stream of bubbles. At first, the rich nose boasts notes of white flowers and freshly baked brioche aromas. As the wine warms in the glass, it exudes scents of dried fruits and toasted almonds and hazelnuts, combining with a hint of orange zest.
On the palate, the wine is immediately powerful and yet exquisitely well-balanced; refreshing flavours of citrus fruit, notably grapefruit, are coupled with creamy notes of pastry.
This wine combines the fullness of the much-celebrated 2008 vintage with the unparalleled and much-loved style of the Cuvée Sir Winston Churchill. A long, lingering finish indicates that this wine has fantastic ageing potential.
Assemblage:
Champagne Pol Roger created their Prestige Cuvée in homage to Sir Winston Churchill mindful of the qualities that he sought in his champagne: robustness, a full-bodied character and relative maturity.
The exact blend is a closely guarded family secret but it is undeniable that the composition would meet with the approval of the man to whom it is dedicated : "My tastes are simple, I am easily satisfied with the best".
Pinot Noir predominates, providing structure, breadth and robustness whilst Chardonnay contributes elegance, finesse and subtlety. Composed exclusively of grapes sourced from Grands Crus Pinot Noir and Chardonnay vineyards which were already under vine during Churchill's lifetime.
Cuvée Sir Winston Churchill is only made in the very best vintages and is always released later than the other vintage dated Champagnes from Pol Roger, marking Churchill's appreciation for older wines.
Dosage - 8 g/l
Background Information:
Pol Roger, a Champenois from Aÿ, founded his champagne house in Epemay in 1849. Over the next 50 years, until his death in 1899, he built his business into one of the most respected in Champagne and, in particular, forged strong trade links with Britain. The founder was succeeded by his sons, Maurice and Georges, who changed their names to Pol-Roger by deed poll and, thereafter, by a further three generations of his direct descendants. To this day the company remains small, family-owned, fiercely independent and unrivalled in its reputation for quality.
Pol Roger own 87 hectares of prime vineyard sites spread over the Montagne de Reims, the Vallée de Ia Marme, the Vallée d'Epemay and the Côte des Blancs. This supply is supplemented by grapes purchased on long-term contracts with growers based on the best sites in the region. Total production at Pol Roger is in the region of 1.5 million bottles per annum, making them one of the smaller of the Grandes Marques.
The cellars extend some 7 kilometres beneath the streets of Epernay and are carved out of the local chalk over three levels, the deepest known as the 'cave de prise de mousse' at 33m below street level. As the name suggests this is where the wine undergoes its secondary fermentation in bottle. This deep cellar is at 9°or less, rather than a normal cellar temperature of 11-12°, thus prolonging this fermentation.
They are amongst the coolest and deepest cellars in the region, a factor which contributes to the famously fine bubbles in Pol Roger's champagnes.