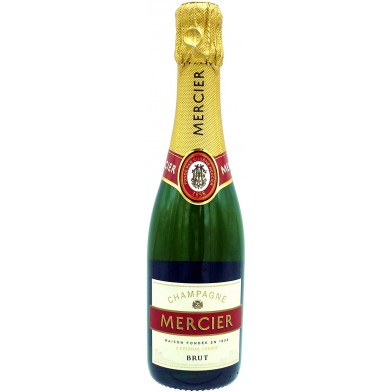 Mercier Champagne's Brut NV Champagne is a reflection of the liveliness, the fresh aromas and the intensely fruity notes of the Mercier style.  Mercier Brut is a traditional blend of wines from this year's harvest and reserve wines from previous years enabling the same taste and the continuing high standards of the style, fresh, fruity, intense and spontaneous.

Mercier Brut is ideal as an aperitif, but it can also be served throughout the meal, with, for example, cooked oysters au gratin, sea bream with lime or fromage frais with herbs.

Maison Mercier, established in 1858 by Eugene Mercier at the youthful age of twenty, is one of the colossal champagne names. Because of the drive of its visionary organizer, Champagne Mercier has turned into a firm French top choice. Eugene Mercier endeavored against the chances to furnish champagne of the most astounding quality to a wide open. Eugene Mercier had a stock response for inescapable doubters: "You can giggle, yet the day will come when streams of champagne will course through Epernay". Around ten years after the fact Eugene was demonstrated right.

By participating in the colossal presentations of the nineteenth century and directing an inventive publicizing effort, Eugene Mercier meant to get the general population creative energy. Champagne Mercier was to wind up an installation at all real social events.

Appreciated in France and all through the world amid the most charming of events, formal and casual, Mercier dependably conveys something additional to the gathering. A magnificent champagne with a liberal and warm identity. Mercier: the champagne of awesome times.

The Brut cuvee is the reference for the House style, mirroring the vivacity, new fragrances and exceptional fruity notes which are the Mercier trademarks.