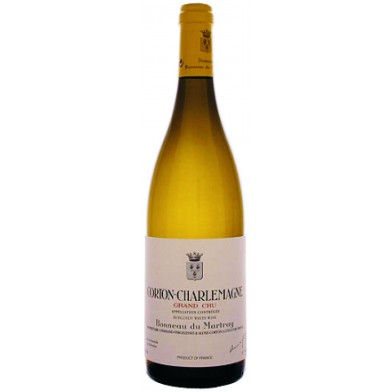 This wine is produced from a west-facing vineyard that enjoys many hours of sunshine, and is both lively and powerful. The subtle citrus and peach aromas with delicate floral notes evolve beautifully into honeysuckle, hazelnut, and cinnamon. The wine has wonderful persistence on the palate and shows all the signs of very long aging potential. It certainly deserves to represent the elite of the Corton Charlemagne appellation.

The original Bonneau property covered 24 hectares though half was sold by one branch of the family and a little more has disappeared since. In Jean le Bault’s time there was a significant proportion of red Corton but much of this has been grubbed up since and replanted with Chardonnay. Today the domaine covers 11.09 hectares, all in one continuous holding located on the Pernand side of the great Corton hill, of which 9.50 hectares are Corton-Charlemagne and the remainder Corton. Yields are severely restricted and in the cuverie as many as 16 different parcels of grapes are vinified separately in order for their respective "terroirs" to be reflected in the wine. The reds have hugely improved under Jean-Charles le Bault’s stewardship, though the site in Le Charlemagne is clearly worthier of grand cru status for white wine rather than red.

Indeed the fame of the domaine rests on its magnificent Corton-Charlemagne, holding centre stage on the slope above the road leading from Aloxe-Corton to Pernand-Vergelesses, straddling the border between En Charlemagne and Le Charlemagne. A huge amount of research has gone into studying the soil throughout the domaine’s holding, and after much reflection biodynamic principles are now being employed in the farming.

Fermentation begins in stainless steel and finishes in casks to which it is transferred 5-6 days later. They are matured in oak barrels (33% new) for 12 months and the separate cuvées are then assembled in stainless steel before being returned to cask for another 6 months prior to being bottled.

It is a fabulous wine that possesses mouth-watering aromas of almond and hazelnut creams. On the palate, this hugely ripe offering exhibits loads of minerals, nuts, honeyed lemons, butterscotch, and pears. It is medium-to-full-bodied, extremely rich (yet fresh and lively), as well as awesome length.