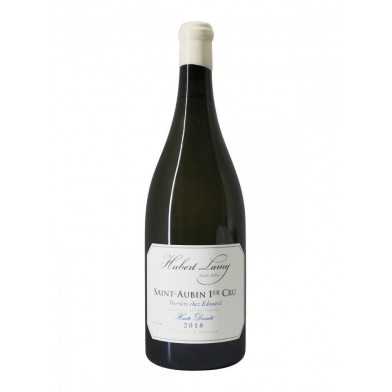 The Haut Densité version of the Derrière Chez Edouard premier cru is absolutely outstanding. Like the Puligny Trémblots, it offers up a more reserved bouquet than the 'regular' bottling, similarly marked by a touch of noble reduction and featuring notes of pear, tangerine and dried flowers. On the palate the wine boasts extraordinary amplitude and dimension for a St-Aubin, its flavours delineated with crystalline purity. And like the Trémblots, its energy and intensity are almost electric.

One of Burgundy’s best-kept secrets is barely a secret anymore. Olivier Lamy is making some of the purest and most mineral white Burgundies of the Côte (and some pretty damn handy reds) and demand now far exceeds supply. This will not surprise those who know how this exceptional vigneron works in the vines. Pioneer of high density and of Poussard pruning amongst other things, Lamy’s attention to detail and innovation in the vineyard is now an inspiration to knowledgeable growers across the Côte and even the world!

This singular wine comes from 0.7-hectares in Derrière Chez Edouard, planted in the year 2000, at a density of roughly 30,000 vines to the hectare. Yes, you did read correctly (the vines are spaced around 30cm apart in 1m rows). At such a density, Lamy typically gets a maximum of three tiny clusters per vine (sometimes one and sometimes none!) and the entire plot only yields enough juice to fill the contents of a single barrel. Lamy’s trials with this spacing have been deemed a qualitative success and he has subsequently rolled out this program in a number of other parcels including Les Tremblots (Puligny, 22,000 vines/ha) and, gulp, on his soupçon of vines in Criots-Bâtard-Montrachet (24,000 vines/ha). As you would imagine, distributor allocations of Lamy’s Haute Densité cuvées rarely top more than a few cases and the wines are seldom tasted in the cellars. How does this differ from the other cuvée from the same site? More intensity, more salinity, more mineral concentration (even though that’s hard to imagine) and somehow less overt fleshiness. It’s like the vines are sucking even more from their soils and the result is something completely unique. Cropped at an astonishing 100 grams per vine.

These Haute Densité wines are some of the rarest young wines on the planet!