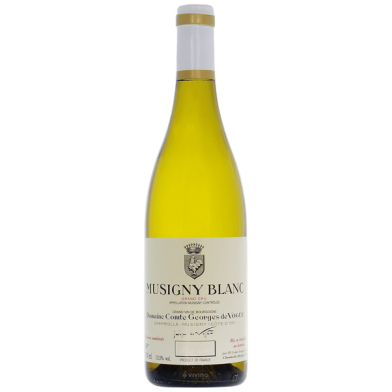 The Vogue Musigny Blanc is a special wine, it is the only Grand Cru white wine in Cote de Nuits. The chardonnay comes from two separate vineyards, both are on the high altitude of Musigny, approximately 0.65-0.66 hectares of vines. The average production is 180 cases.

It is to the fabulous Grand Cru Musigny, of which he is the main owner, that the Comte Georges de Vogüé estate owes its worldwide fame. In addition to vines in the AOC Chambolle-Musigny and Bonnes Mares, the estate has 70% of the total area of ??Musigny. It is also the only one to produce white there, as permitted by the appellation decree. Baroness Bertrand de Ladoucette, descendant of a long line of Vogüé, now manages the property. In 1986, she hired a big name, the oenologist François Millet, to lead the operations. He does not fail to assert his philosophy: to intervene as little as possible in the winemaking process. Thus, fleeing the sirens of marketing which encourage the production of “ready-to-please” wines, on the contrary, his approach consists in making the most of each harvest, whether the vintage promises to be exceptional or more ordinary, to try to maintain the essential from one year to the next: quality. Since then, successes have followed one another, enough to keep the estate at the top of the most prestigious houses in Chambolle-Musigny. To do this, the estate does not hesitate to downgrade all the grapes from vines deemed not sufficiently old.

It is its famous red clay soil, less calcareous than its neighbors, which gives Musigny wines their legendary elegance. The Comte Georges de Vogüé estate has 7.2 hectares out of the 10.77 hectares of the grand cru. As authorized by the decree of the appellation, he cultivates Chardonnay on 0.66 hectares to produce the legendary white Musigny. It is thus the only producer of the unique white Grand Cru of the Côte de Nuits. When it came to replanting these vines, the estate chose to downgrade all its production from the 1994 to 2014 vintages included in white burgundy. Musigny Blanc is a unique Chardonnay unlike any other. It has the substance and concentration of the great whites of Beaune and the mineral power of the great chablis.