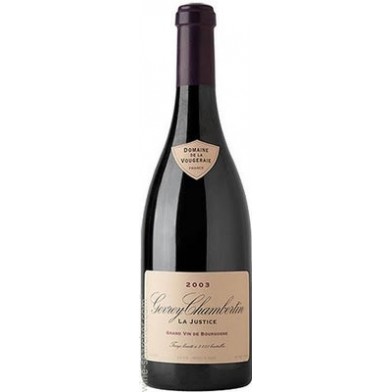 This rich Gevrey-Chambertin from the famous house of Vougeraie is made from very old vines, giving intense aromas of blackcurrants and cherries. Fine fragrance and profound finish.

Only 4 left in stock!

At the foot of the Combe de Lavaux, a cool, deep coomb cut into the hillside as if with a sickle, Gevrey Chambertin is an enthralling overture to the Symphony of the Grands Crus. The air contains hints of all the themes played by the Pinot Noir down to Santenay, some majestic, others more subtle. Gevrey-Chambertin, a king among wines, can only bend its knee before an emperor. Napoleon accepted this homage and remained faithful to it. The count of Las Cases, in his Mémorial de Sainte-Hélène, noted that “For fifteen years the Emperor constantly drank the same wine, which he liked and which we believed was good for him”.

Geographic situation: Our Gevrey-Chambertin is assembled from several parcels which combine harmoniously. To the east of the village’s land lies La Justice, an ancient climat which, as wine critic Jacky Rigaux so rightly points out, lies on the centreline of the cone containing geological material which has fallen from the cone over the millennia. Part of this cuvée comes from a neighbouring climat, Craite-Paille.

Soil and subsoil: The mineral fraction is particularly varied, with a mixture of pure silt, clayey silt and deep clay. The bottom of the parcel is slightly calcareous, the top not at all. GEST* compost.