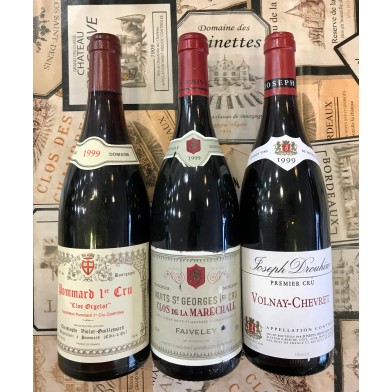 History - A story of terroir, but above all of family ...

Joannès Faivre (1880-1960) started the domain in parallel with his distiller activity.

Marie-Louise Faivre (1903-1987) married Louis VIOLOT for the first time, who died prematurely, crushed by a tank. They will have 2 boys, Roger and Gilbert.

She then married Jules Guillemard, and developed the estate with him.

Christophe joined the estate in 1990 and became the 4th generation operating the 4.5 hectare family estate.

Camille, Chloé, Théo and Louis then come to enlarge the family.

Théo is currently carrying out wine studies, and will be the 5th generation to operate the family estate.

The estate now vinifies the equivalent of 7 hectares of vines.

Domaine Faiveley is one of the largest and most illustrious domaines in Burgundy, and has made its name with red wines made from the Pinot Noir grape.

It was founded in 1825 in the village of Nuits-Saint-Georges under Joseph Faiveley, a wine merchant who had a desire for travel. In the beginning of the 19th Century, trade had begun between Burgundy and northern Europe, predominantly along the rivers and canals connecting the two regions. Merchants from Burgundy would travel along these paths to exchange their wines for textiles. Joseph Faiveley was one of these merchants, introducing his Burgundian wine to the world. Today, the house is run by seventh-generation Erwan Faiveley, and the company has expanded its footprint in the Côte de Beaune, and has vineyards throughout the Côte de Nuits, as well as in the Côte Chalonnaise and Chablis.

Domaine Faiveley is best known for its Pinot Noir and Chardonnay wines, but small amounts of Aligoté are also planted in the Côte Chalonnaise. Currently, Faiveley has 10 hectares (25 acres) of grand cru vineyards out of a total of 115ha (285 acres). Faiveley owns parcels in Gevrey-Chambertin, Bâtard-Montrachet, Volnay and Pommard to name a few, however these are very fragmented with no single site being more than 1ha. The company also buys grapes from other growers.

Traditional winemaking with a modern twist is key in the production of wines from Domaine Faiveley. Modern barrel presses as well as custom wooden vats are combined with long aging in deep 19th-Century cellars to produce deep and rich red wines that need age to show their best.

Joseph Drouhin is one of Burgundy's most important wine producers. Founded in Beaune in 1880, the domaine has expanded throughout the 20th Century to include vineyards in Chablis, the Côte de Nuits, the Côte de Beaune and the Côte Chalonnaise, making everything from simple, village-level cuvées to highly priced grand cru and premier cru wines from Pinot Noir and Chardonnay.

The domaine was started by the eponymous Drouhin, who established the company's headquarters in the city of Beaune in the late 19th Century. His son, Maurice, began to acquire vineyards in the early 20th Century, starting with the now-iconic Clos des Mouches vineyard. Throughout the 1950s and 1960s Joseph Drouhin began to expand its land holdings in Chablis and, in 1988, the domaine established a vineyard in Oregon, in the United States.

Domaine Joseph Drouhin makes several grand cru wines in the Côte d'Or and in Chablis, including ones from Musigny, Corton-Charlemagne and Les Clos, as well as the Marquis de Laguiche Montrachet Grand Cru. It also has land in some of the Côte d'Or's most famous premier cru vineyards, including Chambolle-Musigny's Les Amoureuses vineyard and in Beaune's Clos des Mouches.

Joseph Drouhin makes a range of village-level and regional wines. Grapes for these are sourced from growers in the area, as well as from the domaine's own vineyards.