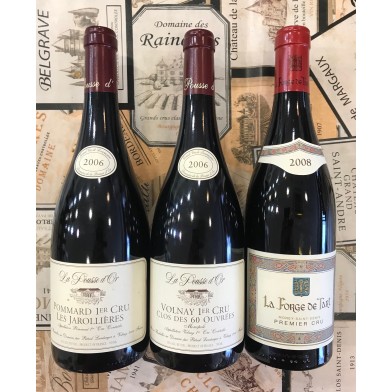 25% OFF Trio of Premier Cru Red Burgundies from Single Vineyards

Domaine de la Pousse d’Or has for decades been the collector’s choice for expressive and memorable wines from Burgundy’s most hallowed terroirs.

This historic estate is one of the Burgundian elite, in a similar realm of such exclusive wineries like Romanée-Conti and Comte de Vogüé, with its strict selection and seamless winemaking.

The history of Pousse d’Or in Volnay underscores its influence throughout the ages. In 1855, the winery was part of a larger domaine that included such names as Romanée-Conti and Clos de Tart. Originally called La Bousse d’Or (Bousse, in old French, means earth; thus, “golden earth”), the domaine changed owners a number of times until legend Gérard Potel took the reins.

It was Potel that put the estate’s wines on the map, with the elegant, refined style that Pousse d’Or is still known for today. In 1997, Patrick Landanger purchased the winery and its vineyards. In the mid-2000s, Landanger added an impressive collection of Côte de Nuits vineyards (from Domaine Moine-Hudelot) to his portfolio.

Clos de Tart is a domaine based on a single grand cru monopole vineyard and winery in the Burgundy commune of Morey-Saint-Denis, making two wines, both from Pinot Noir. Its history dates back to a 12th Century abbey constructed by Cistercian nuns of the Notre Dame de Tart order. The vineyard has remained a monopole ever since. In 2017 it was bought by French billionaire François Pinault for a figure thought to be in excess of €225 million ($260 million).

The property was previously owned by the Mommessin family (since 1932). The family sold its négociant business to Jean-Claude Boisset, of the major Burgundy wine family, but retained the Clos de Tart vineyard. The Mommessin brand has relocated to Beaujolais under the Boisset family, while the wines of Clos de Tart ceased to carry the Mommessin name on the label.

The vineyard covers 7.5 hectares (18.5 acres) and earned its grand cru status in 1939. Clos de Tart has a southeast exposure and is divided into six blocks with slight differences in soil composition and aspect. Each block is harvested and vinified separately to make the most of the differing microclimates. Vine work, including harvesting and training, is mostly done by hand due to the steep gradient of much of the vineyard. The property also has its own nursery where it cultivates massal selections of its vines for future replanting.

The only two wines it produces are the grand cru Clos de Tart, and the premier cru La Forge de Tart that carries the Morey-Saint-Denis designation.