All new products
> Wine>France>Burgundy>25% OFF Trio of Red Burgundies from the excellent 2009 & 2015 vintages 2 available
Special Offer! 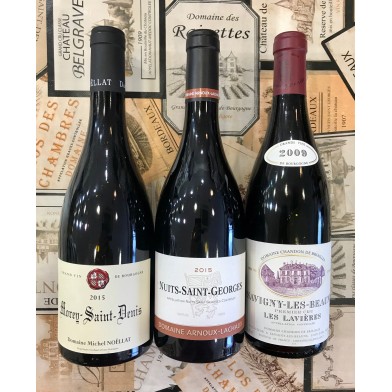 Domaine Arnoux-Lachaux is a red wine producer located in Vosne-Romanée, in Burgundy's Côte de Nuits. The domaine is best known for premium expressions of Pinot Noir from some of the best appellations in Burgundy. Many of the parcels sit adjacent to those of Burgundy superpower Domaine de la Romanée-Conti.

The founders of the estate were Charles Arnoux and Renée Salbreux, and their son Robert took over the estate in 1957. He acquired small plots of vines around Burgundy in both grand and premier cru appellations and, today, the domaine has 14.5 hectares (35 acres) of vines in four grand cru, five premier cru and five village appellations. In 1987, Florence Arnoux and her husband Pascal Lachaux began to work with her father, Robert, at the domaine – they have been in charge of the estate ever since his death in 1995. The name was changed to Arnoux-Lachaux in 2008 to reflect the current ownership.

The vines in the Côte de Nuits appellations are between 40 and 90 years old, with those of Romanée-Saint-Vivant are some of the oldest. Holdings of the domaine include plots in Vosne-Romanée, Clos de Vougeot, Nuits-Saint-Georges, Chambolle-Musigny, Echezeaux and Latricières-Chambertin. Pascal Lachaux uses an organic and biodynamic approach to farming these vines, although currently the domaine is not certified for either.

The wines are vinifed at the domaine's winery in Vosne-Romanée. The wines are aged in French oak and are bottled without being fined nor filtered.

The Noëllat family has held a significant winemaking presence in the Côte de Nuits region of Burgundy for generations and, in 2012, the sixth generation of the Noëllat family, Sophie and Sébastien, joined the family business.

Pinot Noir is the most prevalent grape variety cultivated in the 23 appellations farmed. The grapes are hand-picked, completely destemmed and transferred to thermoregulated stainless steel tanks, before aging in French oak barrels. The proportion of new oak used varies depending on the level of the wine – 30 percent for village-level and 50 percent for the grand and premier crus. Bottling takes place after 15 to 18 months élevage in barrel.

The Chardonnay grapes, too, are harvested by hand, then pressed and the juice allowed to settle under cool temperature conditions. Fermentation then takes place in either stainless steel vats or oak barrels depending on the quality level.

Domaine Chandon de Briailles is a wine producer in the northern part of the Côte de Beaune in Burgundy. The domaine covers 14 hectares (34 acres) of vineyard spread across Savigny-lès-Beaune, Pernand-Vergelesses and Aloxe-Corton, and makes four wines from the Corton Grand Cru hill.

The domaine has been owned by the de Nicolay family since 1834. Countess Chandon de Briailles, (a relation to the Moët & Chandon family) took over the reins in 1982 and dedicated herself to reviving the status of the domain and its wines. Today, Domaine Chandon de Briailles produces an average of 50,000 bottles of wine per year, and has practiced biodynamic principles since 2005.

As is the case for most of Burgundy, the domaine's white wines are made from Chardonnay and the reds from Pinot Noir. The wines are made with as little intervention as possible, using natural yeasts. After vinification, the wines are aged on their lees, then carefully racked and bottled with a gravity feed without filtration or fining. The wines will spend on average between 14 to 18 months in barrel.