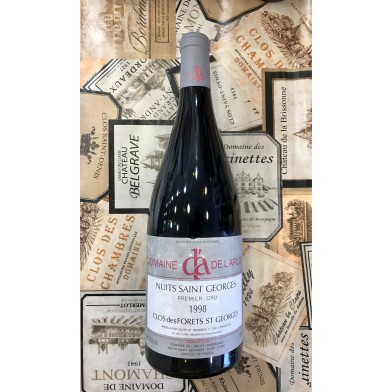 Traditional vinification: a manual harvest, minimal vatting, pumping over and punching down without excess to reveal the full aromatic range drawn from this great terroir. ageing lasts on average 15 months in oak barrels, with a maximum of 50% new barrels, and 3 months in vats before bottling.

2 kilometres to the south of Nuits Saint Georges, at Premeaux-Prissey, the Domaine de l'Arlot is a classic example of an ancient Côte de Nuits Burgundian property.

Old archives recall the presence of Jean-Charles Vienot, heir, from a long line of Burgundians and owner of a house and vines at the end of the eighteenth century in the village of Prémeaux. He was an enterprising man who built a wall around the domaine and thus created the Clos de l'Arlot, which is today a Nuits Saint Georges 1er Cru.

In 1891, the property was sold to a wine merchant, Jules Belin, who enlarged the estate through his purchase of the Clos des Forêts Saint Georges and the Clos du Chapeau, the whole of which went to form the Domaine de l'Arlot. His heirs transferred the buildings and vines to AXA Millésimes almost a century later, at the beginning of 1987. Since then, AXA Millésimes has acquired two plots in Vosne Romanée: Vosne Romanée 1er Cru - Les Suchots and Romanée Saint Vivant Grand Cru.

François Vienot, Jean-Charles' son, had dreamed of a remarkable park in the hollow of an old quarry. Today, hundred-year-old trees, with light filtering through the leaves, and stones which were sculpted by numerous artists at the request of Jules Belin, make this a fabulous theatrical place and a delightful contrast to the strictness of the rows of vines.

Key figures in the Arlot story

The domaine's recent history remains marked by the influence of Jean-Pierre de Smet who ran the domaine for almost two decades. In January 2007, he handed over the direction of the domaine to Christian Seely, who entrusted technical management firstly to Olivier Leriche, then to Jacques Devauges in August 2011, and later to Géraldine Godot in September 2014.

Géraldine Godot is a microbiologist and oenologist. Originating from Burgundy, she studied and spent a large part of her career in the region.