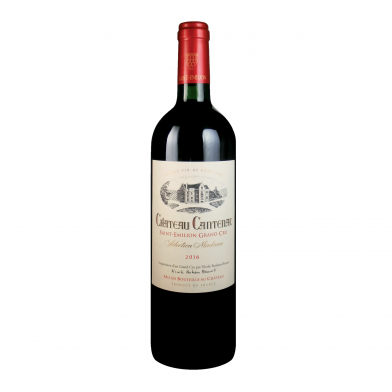 Blueberry and mineral on the nose, with hints of fresh flowers. Full and layered, with superpolished tannins and a long finish. Solid as a rock.

Château Cantenac was built on a beautiful day in 1870, on the place called “Cantenac” ». Its origin dates back to Roman times, bearing various meanings such as that of “enchanted, enchanting” place.

The property and its vineyard are located in the municipality of Saint-Emilion, 3.5 km west of the medieval city, on a promontory of gravel and clay. The “Bordeaux Guide and its Wines” (Ferêt Edition) mentions the property for the 1st time in its edition of 1898 to “the vanguard of the St Emilion hillsides” and as a “2nd Cru”.

M. Mme Despujols Oscar and Jeanne Marthe created the estate back in 1870, and the larger family implanted in the region owned Chateau Tambourlan and other estates. Later, from 1933 to 1937, Mr. Ernest Marache – native of the Nièvre – follows at the head of the estate, having as main activity a large fruit & vegetable trade in Paris.

Finally and since 1937, the Roskam-Brunot Family manages Château Cantenac.

It is Albert Brunot who makes the acquisition of Château Cantenac in 1937, following his father footsteps. Originally from Corrèze, Jean-Baptiste Brunot is the pioneer of the family to have invested in the wine trade, before becoming owner of Château l’Hermitage de Mazerat in 1922 (St-Emilion). Albert Brunot ensures the production and distribution of the estate's wines, accompanied by his supporting wife Emilie. They later acquired Château Tour de Grenet in 1970 (Lussac). Their children Jean Baptiste Brunot and Nicole Roskam-Brunot have pursued this family passion since then.

In 1997, Nicole Roskam-Brunot becomes the owner and manager of Château Cantenac and Chateau Moulin de Grenet, today accompanied by her sons and daughters-in-law, who continue to write new pages in each vintage.