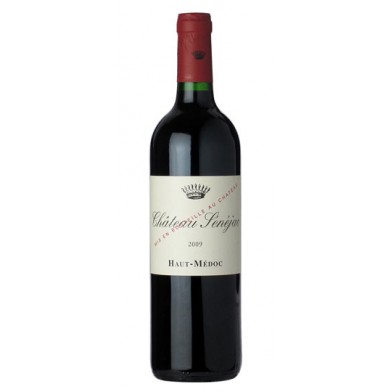 From "the vintage of the Century" this wine is dense purple, with notes of creme de cassis, incense, licqorice and forest floor.  Delicious and full-bodied, with sweet tannins, low acidity, copious fruit and exceptional concentration, everything is in balance and the wine is capable of ageing until at least 2030.

A former Baronial home, the first known owner of Chateau Senejac was in the sixteenth century, a rider, Nicolas de Blois, who married Jeanne Fleix, lady Blanquefort. No doubt does one he planted a vineyard from this century. In the seventeenth century, a great hunter, Marshal d'Ornano, Governor of Guyenne, took possession of the field. in mid-nineteenth century, Senejac vinified the equivalent of 100 000 bottles, much less today. Nobles and gentry, then succeeded at the head of the property that was bought in 1860 by the Earl of Guigne. New impetus to raise the vineyard up to the best Medoc crus was given since its acquisition in 1999 by Lorraine Cordier, also owner of Chateau Talbot, Grand Cru Classe Saint Julien. Following the death of Lorraine Cordier in 2011, the property was taken over by his sister Nancy Bignon Cordier.

The vineyard stretches its Sénéjac ridges on a plateau overlooking the town of Pian. The 37 hectares of vines in one piece are planted on gravelly soils typically deep Médoc.

The vines are composed of 48% Cabernet Sauvignon, 11% Cabernet Franc, 37% Merlot and 4% Petit Verdot. In 1983, the entire vineyard was drained and part of the priests fishponds to allow a better flow of surface waters. The vineyards are maintained in the traditional manner and are subject to the most attentive care.