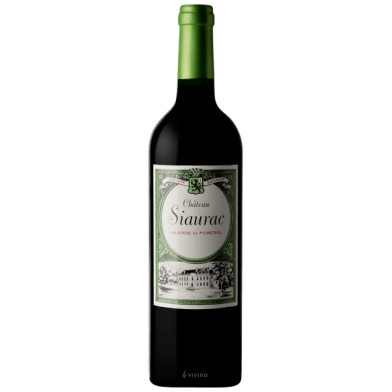 The large, 46 hectare Chateau Siaurac vineyard is planted to 75% Merlot, 19% Cabernet Franc and 6% Malbec. The terroir is gravel and clay soils that comes from two adjoining parcels. Although the parcels are contiguous, they each have different terroirs. The vineyard is planted to a high vine density of 7,100 vines per hectare.

Recently released from our cellars - only a few bottles available.

2005 is a truly fantastic vintage with great quality across the board on both the Left and Right Banks.

The weather during the 2005 growing season was exceptionally dry, leading almost to drought conditions in certain areas. Temperatures were also frequently above average but not to the heatwave extremes of 2003.

Moreover, the wines possess exceptional balance; warm days during August and September imbued the grapes with marvellous ripeness but cool nights ensured that the acidities did not drop.  As a result the wines combine natural richness with a cool, refreshing acidity.

Mention must also be made of the tannins; an effect of the small size of the berries, particularly of the Cabernet Sauvignon, is a very high tannin count in the wine, one of the highest ever recorded in many cases.

These tannins are, however, fully ripe so possess a silky texture on the palate with no hint of aggression or austerity.  The combination of excellent maturity, correct acidity and ripe tannins has produced wines of quite exceptional quality.

How does the vintage compare with the great years of recent memory? Well, outstanding vintages always seem to have a layer of `puppy fat' which gives them a delightful fleshy texture, even at the outset.

1982 springs to mind as a valid comparison in every sense, but it's worth noting that yields in 1982 were considerably higher than in 2005, resulting in slightly lower concentration.  There are some similarities with 1990, but the 2005 wines have greater freshness for the most part as a result of their higher acidities.  The jury remains out as to whether the Vintage of This Century goes to 2005, 2009 or 2010 but my money is on 2005 for drinking now and 2009 for drinking in the second half of this decade.

We have released these wines from our cellars now, in 2021, as all of them are now within their wide, optimum drinking window.  Snap them up while you can as 2005 Bordeaux reds are becoming increasingly difficult to find and we have only a limited quantity to be able to offer.