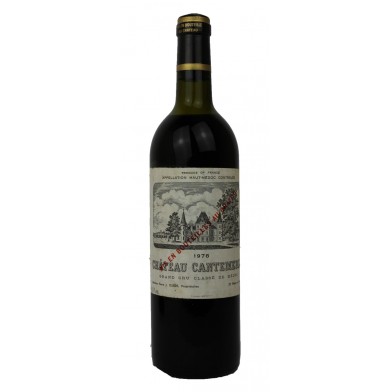 The 1978 Cantemerle has been fully mature for over two decades. It is medium ruby with some amber/orange colour at the edges, possessing a light-intensity, fragrant bouquet suggestive of berry fruit and oak. On the palate, the flavors reveal adequate fruit and concentration with a medium finish.

The first traces of viticultural production on the property were found in 1354 - the Lord of Cantemerle paid his tithes on wine with a tonneau (tun or Bordeaux cask) of clairet (the pale red wine which inspired the English word 'claret').

Bordeaux's book of arms shows that during the fifteenth century, a union was formed between the Caupène and la Roque families, with Jeanne de Caupène given in marriage to Henry de la Roque. Their son Charles became the Lord of Cantemerle at the beginning of the sixteenth century and took Isabeau de Lanes as his wife.

A title deed of 1536 shows that Jean de la Roque, also an equerry, was Lord of both Gua and Cantemerle. The Gironde region's historical archives mention that, in 1540, Jehan de la Roque possessed the noble house of Cantemerle, in the jurisdiction of Blanquefort, and thereby had an income of sixty Bordeaux francs in deniers, approximately five or six barrels of wine and some poultry.

In 1575, only three "tonneaux" of wine were collected - that is, 12 Bordeaux barrels - on the Cantemerle estate. During the Middle Ages and up until the sixteenth century, the Médoc was devoted more to cereal-growing than to wine production. On 20 August, 1579 , Jean de Villeneuve, second president of the parliament of Bordeaux, bought the noble houses and outbuildings of Cantemerle, la Raze and Nestérieu for 12,500 livres or "4,166 crowns and two-thirds of a crown".