All new products
> Wine>France>Bordeaux>Château Cos d'Estournel (1959) 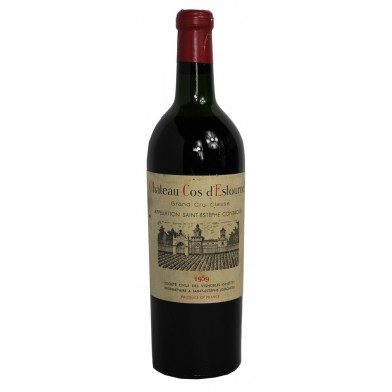 Neal Martin said in 2018:  "The 1959 Cos d’Estournel is a vintage that I have only met once before out of double magnum. Coming so soon after the devastating spring frosts of 1956, I wonder if any fruit from young vines entered the blend? I don’t believe so, since parcels were replanted in the early sixties. It is a lovely wine with an opulent mint and fig-tinged bouquet, quite fleshy in texture and opulent."

The d’Estournel family hailed from Quercy in the Lot département. Louis Gaspard d’Estournel was born on 3 January 1762 and at the age of twenty-nine, inherited the “maison noble de Pommies et de Caux”, “Pommies” referring to what is presently Château Pomys and “Caux” the name of the hill to the north of Lafite-Rothschild whose spelling mutated into “Cos”. Not satisfied with his inheritance, Louis Gaspard augmented his holdings with further purchases of land around Bordeaux. According to Clive Coates MW, it was during a summer afternoon in 1811 that Gaspard stood in Lafite, gazing northwards towards his parcel of land and noticed similarities with their respective aspects and soils.

It was his eureka moment.

Gaspard realized that it was possible to produce a wine of similar standing to Lafite. At that time much of Saint-Estèphe was scrubland, awaiting vines. He planted around 12 hectares, but in the same year he suffered foreclosure for an outstanding sum of just 250,000 Francs. Fortunately, thanks to some clever small print and/or clauses inserted into the contract of sale, he was able to remain proprietor of Cos and in a twist of fate, persuaded the beneficiary of his foreclosure to sell the shares back to him in 1821.

Surely relieved to have kept his hands on his beloved estate, Gaspard expanded the vineyard to 57 hectares between 1821 and 1847 via the acquisition of 80 parcels. This included the neighboring Cos-Labory whose choicest plots were incorporated into Cos d’Estournel, (which might explain why Cos-Labory has remained in its shadow). From the 1830s Louis Gaspard began to construct his fancy winery. Influenced by his travels to the Orient and especially to India, where he traded and bred Arabian stallions, he integrated an Indian aesthetic, mixed with Chinese pagodas and towers, all in refulgent sandstone. Looking out onto the road he constructed a triumphal archway inscribed with the motto “Semper Fidelis” or “Always Faithful”, the motto of the US Marine Corps. Directly behind, an ornately decorated wooden door imported from the Palace of Zanzibar in the early 1800s. (Incidentally, when I drove past in early August this year, the so-called “Zanzibar Door” was covered in black tarpaulin following an arson attack on 25 July this year. It begs the question – why?)

Inevitably Louis Gaspard became known as “The Maharaja of Saint-Estèphe”. One might expect he designed a flamboyant château to inhabit and yet Gaspard remained in his perfectly decent abode at Château Pomys. Indeed, there has never been any residential aspect to Cos d’Estournel, leading one to conclude that it was Gaspard’s adoration for his vineyard manifested in the architectural finery. This expansion and construction ran in tandem with a growing reputation for the quality of the wine. Unsurprisingly Cos d’Estournel was classified a Second Growth in 1855. Sadly, Gaspard was not there to enjoy just reward for his foresight and efforts. He was forced to sell the estate in 1852 and died a year later. If you look towards the Lafite-side of the château, under a tree you will see a statue of Louis Gaspard commemorating his achievement, the man I mentioned in my preamble. Say hello next time you are there taking photos. 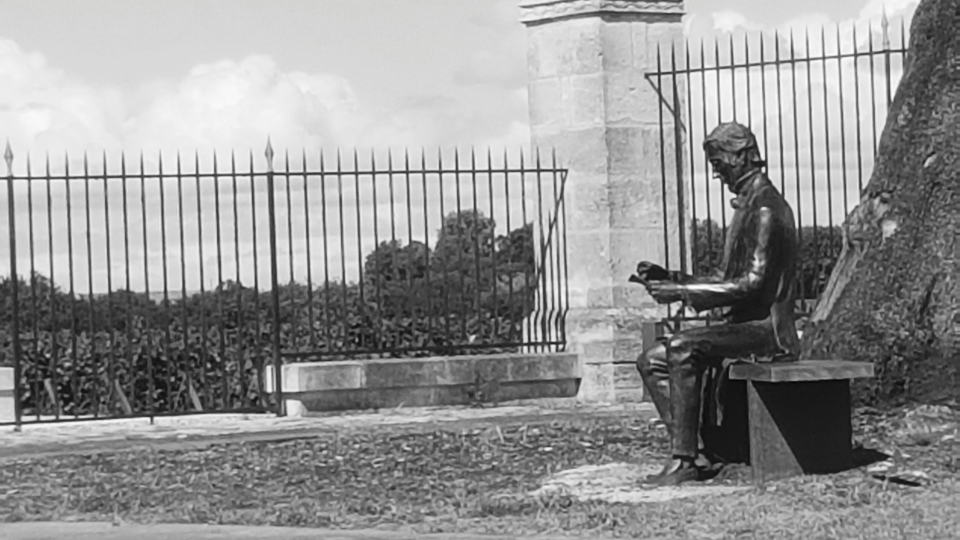 In 1852 Cos d’Estournel sold for the princely sum of 1,150,000 Francs, including Cos Labory and Pomys. The purchaser was Charles Cecil Martyn, a Parisian-based Londoner financier, though he remained an absentee landlord. Martyn sold off Cos-Labory in 1860, then other estates in 1869. However, Martyn assiduously appointed Jérôme Chiapella, the proprietor of La Mission Haut-Brion and négoçiant, to take care of Cos d’Estournel. Can you see the irony? Chiapella’s own estate in Graves was unfairly ignored by the 1855 classification and yet he agreed to run a Second Growth up in Saint-Estèphe. I wonder if Chiapella coveted ambitions to buy Cos d’Estournel himself to rectify that injustice. The 1860s saw further improvements, ensuring that it vied with the likes of Léoville, with prices to match. Workers were generally well looked after with free medical care and housing facilities, much like Montrose at the time. Whether or not Chiapella had motives to buy Cos d’Estournel, it was not to be. In 1869, ownership passed to a gentleman by the name of “Errazu”, a bon viveur whose tenure lasted two decades. Wines from this period are renowned, purportedly equal to coeval First Growths. It was then sold to the Holstein brothers. Subsequently in 1894, Cos d’Estournel passed into the hands of Louis Charmolüe, the owner of Montrose that married Holstein’s daughter and heiress. It is for this reason that many of the ancient bottles of Cos d’Estournel reside at Montrose, much to the current owner’s chagrin.

In 1917 Fernand Ginestet acquired the estate as well as Château de Marbuzet. His daughter Arlette inherited the property and married into the Prats family. She had three children, Jean-Marie, Yves and Bruno. It was the charismatic Bruno Prats who undertook the management of Cos d’Estournel in 1971 and became synonymous with the estate, an ambassador par excellence. In 1998, family inheritance issues saw the estate sold to the Tailan group and Argentinean investors, though their tenure was short-lived. In 2000, Cos d’Estournel was sold to Geneva-based entrepreneur, Michel Reybier, a quiet and private businessman who had made his fortune in the food industry,  and who is nearly always present whenever I visit. Reybier requested Jean-Guillaume Prats to take over from his father to maintain continuity, slipping into a directorial and ambassadorial role as good as his father.

The 100-hectare estate comprises 70 hectares of vine that surround the property on top of the hill it cohabits with Cos-Labory. Cabernet Sauvignon is planted on the higher reaches of the vineyards and Merlot on the lower. A map dating from 1947 shows at that time, just 35 to 40 hectares were under vine with large tracts of pasture. The vineyard comprises a 16-metre elevation, although that only takes it up to a “lofty” 19 metres in height, yet that is sufficient to accommodate a variety of favorable exposures and orientations. Generally, there is a high gravel content and less clay than other Saint-Estèphe vineyards, which means its soils are particularly free draining. Like many Bordeaux estates, the team has undertaken soil analysis in recent years. In 2000, one hundred pits were excavated around the vineyard to examine soils types. Four years later, advances in technology allowed them to conduct a resistivity analysis to paint a more accurate picture. They discovered 19 different soil-types that form the template to treat the vineyard as individual blocks, each vinified in their own dedicated vat. The first block that I inspected during my visit was a 14-hectare parcel on the eastern slope, which is exposed to the wind and the afternoon shade and is suitable for Merlot, whereas on the south-facing slope towards Lafite-Rothschild, there is a majority of Cabernet Sauvignon planted in 1961 and 1962 after the frosts that affected Bordeaux in the former year.

The vineyard currently consists of 58% Cabernet Sauvignon, 38% Merlot, 2% Petit Verdot and 2% Cabernet Franc. I have included blends for respective vintages in my tasting notes where they were recorded. It seems like a “seasoning” of Cabernet Franc and Petit Verdot only entered the Grand Vin around 2000. As I briefly mentioned, it is the Merlot, especially its oldest vines that impart the more opulent style of Saint-Estèphe. The average vine age is 35 years planted at between 8,000 and 10,000 vines per hectare.

I have already described the château’s distinctive Oriental design. Pathways are flanked by tall palm trees that enhance the tropical look and elephant shaped bushes that, to Jean-Guillaume Prat’s dismay, refused to grow, leaving just a bare wire cage and a recalcitrant shrub at its base. I vividly recall him escorting me around the new winery just after its completion. It was quite an eye-opener. Its modernism in the form of smoked glass pillars and tenebrous lighting were in stark contrast to the almost Luddite cranks and pulleys. They were clearly eschewing automation, which was the watchword for two decade’s progress in Bordeaux. Cos d’Estournel seemed to be winding back the clock, embracing mechanics and physically maneuvering entire lots of wine as smoothly and controllably as possible, utilizing the invisible hand of gravity to transfer the wine from one stage of vinification to another. It was a prescient move and many Bordeaux estates have gone back to simplified modus operandi.

The incoming fruit undergoes a strict selection, the Merlot given a cold-soak before fermentation, which is started using natural yeasts. “The first vintage to be vinified in the winery was the 2008,” Arangoits tells me as we inspect the vats from a walkway above. “The previous three vintages were made in a temporary facility in another building. Before that, we did not have much space and barrels had to be stored five tiers high. (This I vividly remember from my first visits...it was cramped to say the least.) We had to excavate 17 meters into the ground to enable the use of gravity transfer. We have 72 troconic, double-lined stainless steel vats: forty-eight vats 115 hectoliters in size plus another twenty-four vats that range between 20 and 60 hectoliters. There is a layer of insulation inside so that the temperature regulates similarly to cement.”

I ask how easily it is to estimate which lots will be vinified in which vats since yields vary from year to year. “Well, that’s a good question. We know about 80% what will happen before the harvest. That can be measured. Then 20% just depends on the circumstances. We usually isolate parcels where we are unsure about quality. I actually like the larger vats. I like the synergy between different parcels blended together. We usually do a four-week skin maceration depending on the vintage. We work more with délestage than remontage (bleeding the tank rather than pumping over). We do this manually without pumps. This is good for troconic vats because it allows the cap to breathe and it allows the berries to remain intact without compressing. What juice there is, stays in the berry. For the pressed wine, we use a vertical press and transfer it into barrel that we grade on four levels. We use about 8 to 10% vin de presse but these days we can obtain that by extracting less and being more gentle.”