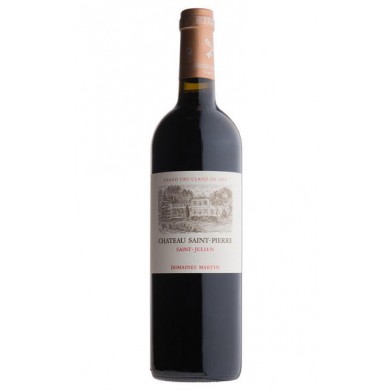 Lovely Cassis note on the nose.  Blackcurrant fruit with a gentle leafy edge, pure and precise.  The palate has a depth of concentrated Blackcurrant and plum fruit, rich and yet lifted.  Full and rounded but the fine and ripe tannins, so typical of the finest 2016’s, create a linear feel, a lovely textural matter to them, gripping the palate and holding the fruit leading to a long length.  Everything is finely placed producing a deliciously compact wine with all the components to age well.

Established in the 17th century, Chateau Saint-Pierre was awarded the ranking of 4th Grand Cru Classé in the 1855 classification system. The estate became fragmented and it was not until 1982 that the passion of Henri Martin, part-owner of Chateau Gloria, would elevate the estate to its former glory.

Located in the municipality of Beychevelle, the vineyard of 17 hectares is planted with vines aged 50 years on average. A majority of Cabernet Sauvignon vines is supplemented by Merlot and Cabernet Franc, planted on Gunzien gravel on sandy-clay subsoil. This very qualitative terroir has contributed to making the estate one of the most famous of the northern Medoc and Saint-Julien appellation. The wine has a very seductive profile, a roundness and maturity of the tannins.

Chateau Saint-Pierre is now the property of Henri Martin's daughter, Françoise Triaud. Her husband, Jean-Louis Triaud, has also been President of the Girondins de Bordeaux between 1996 and 2017, and is in charge of the General Management.